(CMR) Four Central American countries are experiencing an interruption in the supply of electricity with many taking to social media to express their frustrations over the blackouts. Area of Honduras, El Salvador, Guatemala, and Nicaragua have reported afternoon outages. A power failure along the transmission line in southern Honduras connected to the Central Aermcian Electric System (SER) is said to be the issue. 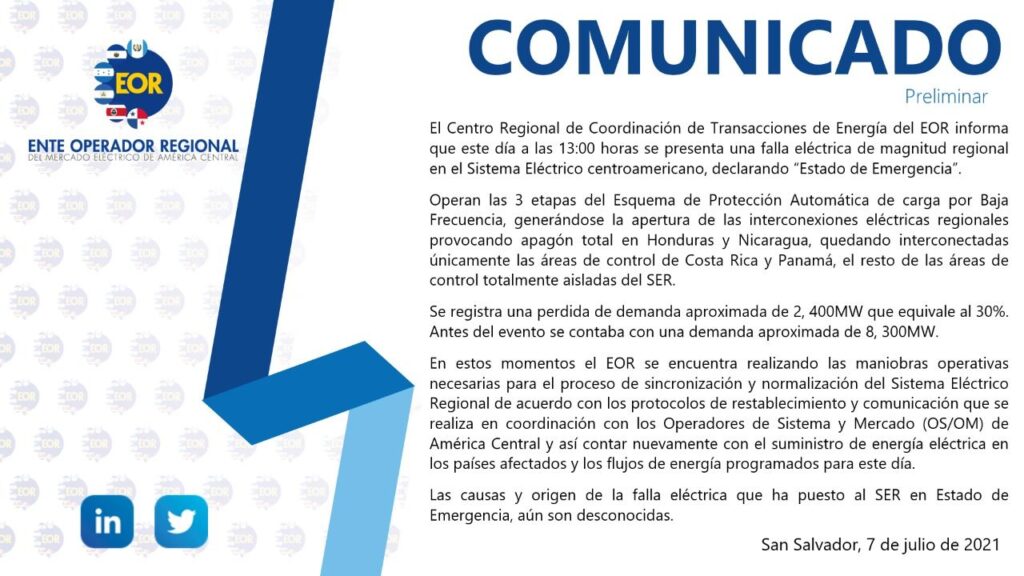 The capital Tegucigalpa in Honduras and highly populated San Pedro are said to have lost power around 1:00 p.m. Wednesday afternoon. The Regional Operating Entity (EOR) which oversees the region's electrical network reported that the serious incident originated between the Honduran substations of Pavana and Saint Lucia.

Only the control area of Costa Rica and Panama were interconnected.

It appears that the reason for the failure is heavy rains and damage caused by a tree that fell directly on the transmission line. The regional electrical system is designed in such a way that interstate connections can be severed in order to protect the national grids of each country. Once the SER detected the event, it isolated the national electrical systems to avoid region-wide failures which the transmission system is not robust enough to handle according to the EOR Executive Director.

Some parts of Nicaragua were having power restored after 2:20 p.m. or just an hour after the outage. Honduras residents were still being impacted right before 8:00 p.m.

This is the second time in less than a month that a national blackout has occurred. On June 9 several Central American countries suffered interruptions for over four hours due to a failure that originated in Nicaragua.

No, thanks.
How do you feel after reading this?
Tags: Honduraspower outage

Flight to Bahamas postponed after students refused to wear masks