(CMR) The sister islands are now under a Tropical Storm Alert as of 6:00 p.m. tonight as Tropical Storm Elsa heads towards the Lesser Antilles Hazard Management has announced. At 8 p.m. AST, the center of Tropical Storm Elsa was located about 345 miles (560 km) east of Barbados. It's moving toward the west-northwest near 28 mph (44 km/h) and this general motion is expected to continue for the next couple of days. Maximum sustained winds are at 45mph. 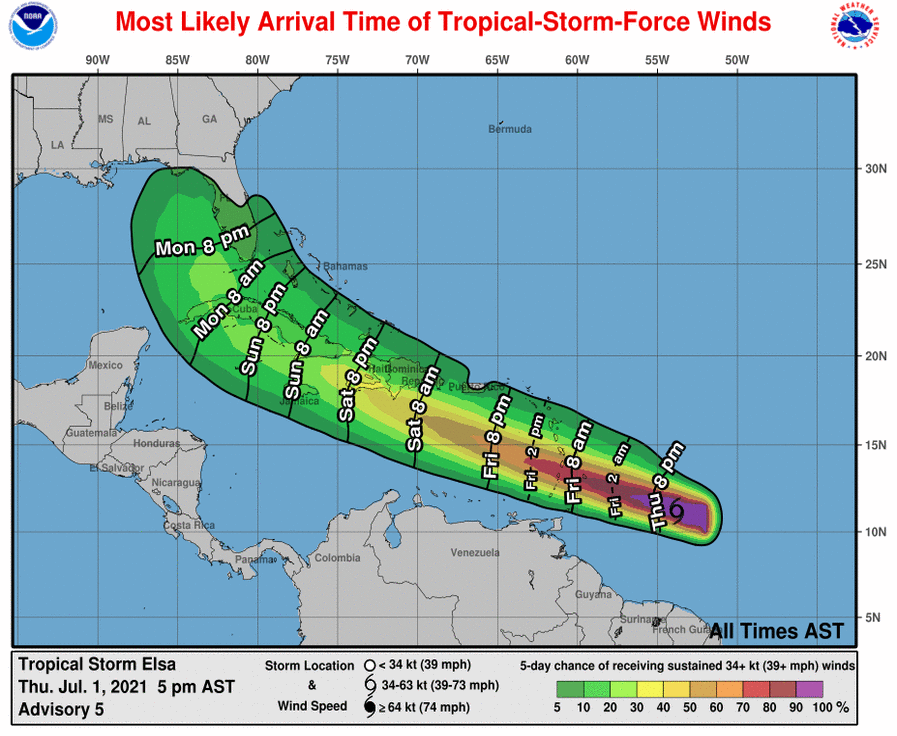 A tropical storm ‘alert’ means that tropical storm-force winds are possible in Little Cayman and Cayman Brac within 72 hours. On the current forecast track, Tropical Storm Elsa is expected to pass 70 miles away from the Sister Islands, but due to uncertainty in the models for both the track and intensity of Tropical Storm Elsa, the Alert is being issued as a precaution.

Residents of the Sister Islands should closely monitor the progress of Tropical Storm Elsa.

In the meantime, residents of Cayman Brac and Little Cayman are encouraged to make preparations; including ensuring they have supplies of non-perishable food and bottled water. The District Commissioner for the Sister Islands, Mark Tibbetts has confirmed that preparations are already underway at the Emergency Shelter at the Aston Rutty Civic Centre.

District Officer Tate McFarlane is also ensuring that Little Cayman is ready for the potential threat. Additionally, the Community Emergency Response Teams (CERTs) on both Little Cayman and Cayman Brac are on standby.

Further details will be issued on Friday, but all residents, including those on Grand Cayman are encouraged to closely monitor the progress of Tropical Storm Elsa.

By Sunday, Elsa is forecast to move near Jamaica and portions of eastern Cuba.

A Tropical Storm Warning is in effect for Barbados, Martinique, St. Lucia, St. Vincent and the Grenadines. Tropical storm conditions are expected in portions of the Windward and southern Leeward Islands within the warning areas on Friday.

OCP and the RCIPS Headquarters relocate to RBC building