“Almost nothing in these materials was true. The marketing produced the illusion of a genuine software startup to perpetuate a massive investment fraud. The startup could never have produced any of the software it claimed to be producing. It lied about the background of its founder, and it misled investors as to the very existence of functional software in order to induce them to invest. NO functional software ever exited.”

(CMR) A Cayman Special Economic Zone Company (SEZC) is being sued for alleged fraud in the United States District Court Middle District of Florida Jacksonville division court documents from June 24 reveal. The Plaintiffs are alleging numerous violations of the Securities and Exchange Act and SEC Rule and common law fraud by a Cayman crypto company registered as Crowd Machine SEZC.

The company's Cayman address is listed as 236 Britcay House on Eastern Avenue, George Town, Grand Cayman. DCI has them registered with a valid business license until November 2022.

Plaintiff George Bachiashvili shared that he purchased $2.1 million of CMCT tokens in February 2018 and Plaintiff Jason Bonayer purchased $125,000 in tokens. They both still have their tokens which they claim are worthless.

The pair claims that they were offered the opportunity to invest in this software business described as “a startup developing a cryptocurrency-based ‘no-code' computer application referred to as “the Crowd Computer.”

The lawsuit claims that the “driving force” behind the business was Craig Sproule and that Crowd Computer software is owed by Metavine; a company Sproule founded in 2013. The company was formed in 2017 along with a related company incorporated in Delaware. The purpose of the company was to perpetually license the software and then issue an offering of cryptocurrency tokens through cryptocurrency exchanges.

The two exchanges used are based in Seychelles.

The Plaintiffs provided investment capital by purchasing the tokens – Crowd Machine Compute Token; a decision they claim was made based on false marketing information and a white paper provided by the Defendants. The company claimed that their software was being used by “major Fortune 500 companies” who had already made “significant investments in the technology”.

It is also alleged to have said that they were already generating revenue and had global partners – information which is now said to have been completely false and “a total fabrication.”

It also used a Telegram instant message channel to make the false representations that have now been erased and scrubbed from the internet. Online searches reveal people thinking that this technology would be “revolutionary.”

The complaint states that in April 2018 it started selling tokens to the general public through unregistered foreign exchanges to lure in more investors and speculators to purchase tokens; despite never having a functional product. The listing on foreign exchanges was an attempt to avoid SEC and US regulators. It also alleges that in contravention of SEC cryptocurrency regulations the company was never duly registered with the SEC.

“The Defendants Crowd Machine and Sproule knowingly and surreptitiously used third parties, Roger Tichenor and Charlie Shrem, also named Defendants herein, to offer investment in Crowd Machine to as many other investors as possible including Plaintiffs Jason Bonayer and George Bachiashvil.”

The Plaintiffs claim that they spent millions of dollars in token purchases and the company took in over $30 million in investment money with no viable product to show for the funds. There appear to be no real prospects of a product ever being developed and they alleged the entire thing is a fraud. They are seeking losses for the original investment and losses on subsequent purchase of CMCT on foreign exchanges.

Defendant and CEO Craig Sproule is an Australian citizen residing in San Jose California. He made his debut in Silicon Valley in 2013 by proclaiming he was an experienced programmer and software engineer from Australia with extensive experience in software systems integration. He was able to raise almost a million dollars of equity investment almost immediately. 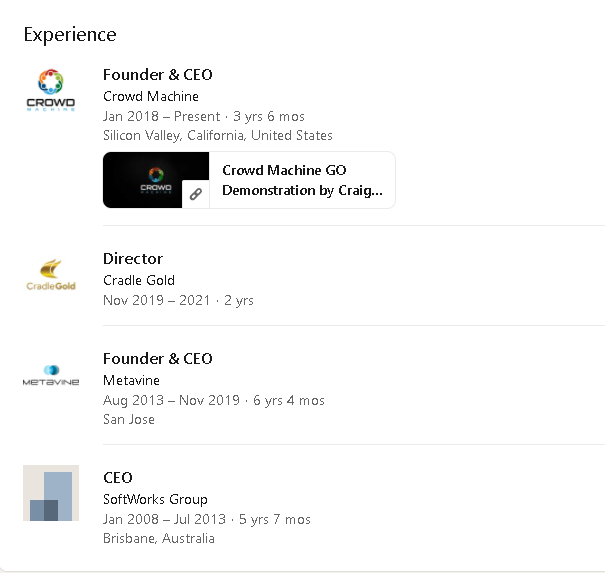 The multiple other listed defendants are all US citizens living in various states including Florida.

“As Crowd Machine never had any functional software, no functional business, and comprised substantially a Ponzi scheme, the price of CMCT promptly
plummeted to near zero, rendering the investment worthless.”

No, thanks.
How do you feel after reading this?
Tags: Craig SprouleCrowd Machine SEZC

How to discipline your children without destroying their self-esteem