(CMR) Jamaican dancehall artist Intence has caused quite a stir in the Cayman Islands after he visited John Gray High School and was permitted to address the students around lunchtime on Thursday afternoon. Some have called the situation a security breach and are demanding an answer from school administrators about how this was permitted.

School administrators appear to be just as baffled as the parents and are said to now be investigating the incident. Videos of his visit have taken social media by storm.

Parents reached out to CMR sharing their concerns after they say their kids were exposed to a less than desirable member of the Jamaican dancehall community without their express permission or knowledge beforehand. He arrived on location smoking in this car while being chaperoned by his producer.

CMR understands that he was headed to Cayman Brac Friday to also speak to school students there before his departure but that may have been interrupted after concerned parents heard about his intended visit to the quieter sister island.

Multiple parents and concerned citizens have contacted Cayman Marl Road expressing their shock and dismay that this artist was allowed to address students given his controversial musical style and previous messages about Caymanians made on stage.

From CMR's investigative efforts it appears that no permission was given for him to visit the campus at that time.

One source shared that they understand that he may have been given permission to speak to the Boyz2Men group off-campus and he simply showed up at the venue unannounced and was permitted entry. It is alleged that he did not show up for that event but instead did an impromptu and unannounced visit to the school campus. Students can be seen ambushing the car and taking out their cellular phones to go live and take video footage of the visit.

Speaking to CMR, an anonymous source connected to the situation clarified that a local agency has reached out to the Boyz2Men program to use him as a guest speaker. However, because they were unfamiliar with him they decided to carry out some research and found that he was not in keeping with the overarching message of their organization. Negotiations had been ongoing but they decided against having him visit their group instead opting to have them focus their time on exam preparation.

The source shared, Intence “does not represent the message that we are giving our young boys” about life in general and were honestly taken aback by his unscheduled visit to the school.

Some parents have accepted that his brief comments which encouraged kids to stay in school were positive, however, they still argue that his overall lifestyle is not one for young people to esteem too and parents should have been in a position to decided if this was appropriate for their children. Most have agreed that he is not a role model for children. One noted:

“Young people don't pay attention to what you say in a cafeteria the one time, they instead watch your overall lifestyle, following these guys on social media etc. and see what they are all about. The smoking, drinking and disrepecting women etc. is not what you would any young person to look up to”

Parents have also expressed concerns about the ongoing unfeathered use of cellular phones in government schools by students. Numerous disparaging remarks were received about the artist including people commenting about his bleached-out skin.

Intence was permitted entry to the Cayman Islands to perform at a local concert at the Lions Centre last week Friday. Part of his performance that went viral included a video of a female concertgoer who he pushed off stage with his gyrating and sexually suggestive dancing. 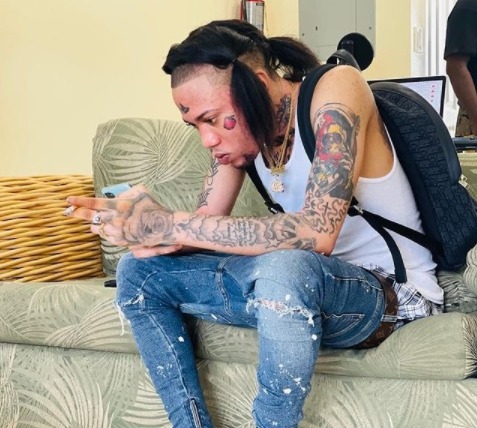 He was brought to Cayman by a Jamaican man who was recently involved in a relationship that led to one woman being arrested for transpassing and property damage. Sources indicate the promoter's ex-wife would have applied for the work permit that allowed him to enter the Cayman Islands. as the promoter is actually on a visitor's visa at this time.

His visit also caused a few eyebrows to be raised after his brother was able to secure a Caymanian fiance only after three weeks on the island.

Some others shared concerns about how he was permitted by Cayman islands Border Control to enter the Cayman Islands given the previous policy about certain artists entering Cayman. Another concerned person noted that they couldn't help but wonder who controlled the numbers at the event since the covid regulations remain in place for large gatherings.

No, thanks.
How do you feel after reading this?
Tags: IntenceJamaican Dancehall