(CMR) Triple C School has attempted to prepare its parents for yet another failing report according to CMR sources. Robert Lankford sent an email on Wednesday evening advising parents that he was attempting to give them “a heads-up and understand all that is involved”. The meeting was held this evening at the school's multipurpose hall; where parents have been informed that the Government Inspection Report will be giving them a failing mark.

It was also revealed to CMR that they “fired” the principal, Mable Ricardson, when it sent official correspondence to everyone indicated she is “no longer the Principal/Chief Administrative Officer at Triple C School.” The letter offered no explanation and instead wished her well and noted that Robert Lankford would be acting in the position until further notice.

Although claiming that she has “moved on” they on to say that they want the parents to know that their “decisions are based solely on the welfare and interest of our students” et al and they were asking for their understanding and support. Speculation is that at that time the school was already aware of the poor outcome of the Inspection Report from the Office of Education Standards.” 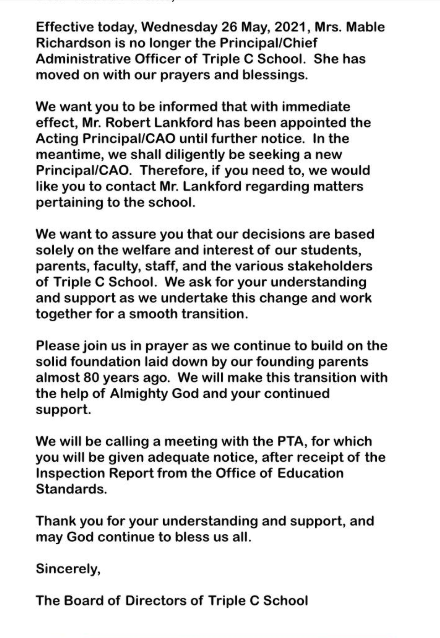 Some concerned parents have requested to have the former vice-principal for elementary and academics to come back to the private school claiming that since she left things have just not been the same. They understand that the church will not allow her back because she is a member of another church in North Side. CMR understands she teaches at Grace Academy.

In May 2019 the school faced a similar situation when the inspectors failed the Christian school giving it a week status despite the fact that only 2% of parenting believe the school was failing their children.  After that report, many parents stood by the school claiming that the failures could be easily fixed. The school graduated another group of high school students earlier this week.

The report criticized much of the school's academic programs and also found there was a lack of leadership and that former principal Richardson was making most of the decisions. Five recommendations were made and after hiring a new vice-principal of elementary it was hopeful the results would be better.

Last year the Office of Education Standards inspectors said that the school had made satisfactory progress in adopting recommendations that came out of the weak report in its Follow Through Inspection Report which was published in February 2020.

Triple C Christian School offers a North American curriculum for pre-school to grade 12 based on the United States national standards and high academic expectations and was founded in October 1941. They are governed by a 15 member board and have a 12.6 acre campus with 22 large classrooms.

No, thanks.
How do you feel after reading this?
Tags: Triple C School