Rudolph Rambaran arrested this morning at the prison for drugs

“I want us all to be mindful of, and sensitive to, the fact that the individual concerned has a partner who also works with us and who is completely unconnected to the reported incident. Please be respectful of that.”

(CMR) In an internal email, Director of Prisons Steve Barrett has informed his colleagues that the partner of arrested prison officer, Rudolph Rambaran (39) is not connected to his drug bust this morning. Kate Dunkley is an officer from the UK and has been with the service for around three years.

This surprising announcement comes on the heal of the RCIPS confirming CMR's earlier report that a prison officer was arrested this morning at the prison shortly after 6:00 a.m. and a criminal investigation has been launched. They noted that two packages of ganja were handed over to the police and officers were informed that a prison officer was attempting to introduce the drugs into the prison. 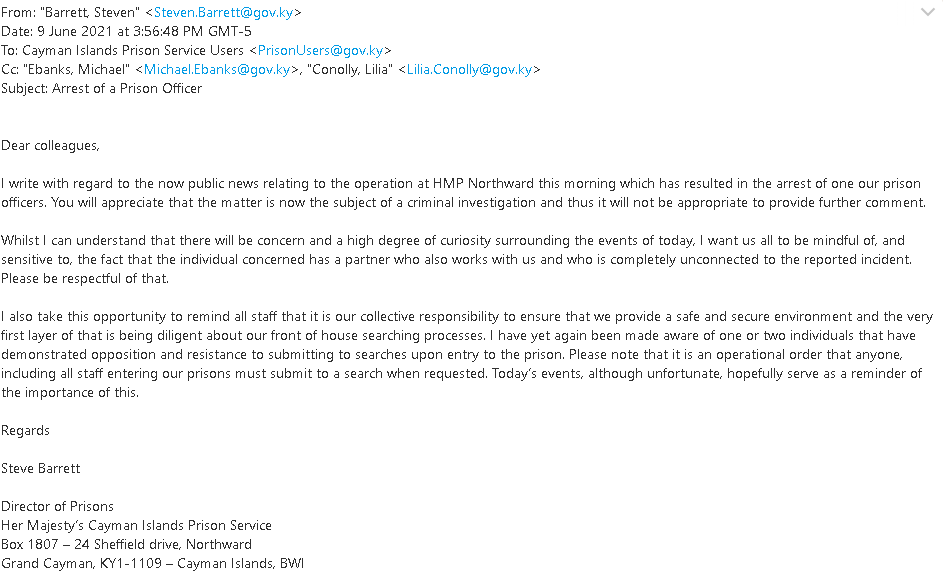 As reported earlier Rambaran lives with Dunkley who was previously married to a Caymanian from West Bay who is the nephew of a government minister. Oddly, this email appears to conclude that his girlfriend who lives with him has no connection to the drug allegations again him. The email states that although some may be concerned or curious about the arrests that she is not connected.  He also took the opportunity to remind employees of the importance of these searches. He noted that “one or two individuals that have demonstrated opposition and resistance to submitting to searches upon entry to the prison”.

One observer noted that:

“Whilst there are preliminary inquiries at this earlier stage of the investigation it also means that no one in management should be making such bold conclusions that exclude anyone especially persons close to the arrested man. The truth is no one knows all who may be involved in this matter.”

Police also confirmed reports that “further evidence” was found in his vehicle as CMR also reported.

CMR understands that Rambaran remains in police custody and “is singing like a canary.” More arrests are likely as the investigation continues.

No, thanks.
How do you feel after reading this?
Tags: drug-related arrestRudolph Rambaran

(CMR) Police are investigating the theft of 100 pounds of fish from a container at the back of the premises...

(CMR) Details have emerged about how a woman who was wanted for murder in Jamaica got to the Cayman Islands...

(CMR) The Cayman Islands Red Cross Thrift Shop in George Town has seen an increase in theft and burglaries recently....

UPDATE: The 19-year-old Bodden Town man, who was arrested on Thursday, 12 January, for assaulting an off-duty policeman, has now...