According to letsrun.com, the Diamond League is starting a few weeks later than usual. As a result, many top American stars have already competed in big-time domestic meets like the USATF Grand Prix in Eugene and the USATF Golden Games at Mt. SAC. Meanwhile, the  Golden Spike meet in Ostrava served as the unofficial opener for the European season, with big names such as Joshua Cheptegei, Jacob Kiplimo, and Sha’Carri Richardson all earning dominant victories.

The 100 meters at 3:24 pm ET is expected to see Richardson, who has been having an outstanding season, compete against Jamaica’s Shelly-Ann Fraser-Pryce, who ran 10.71 to claim the 2019 world title in Doha, and Great Britain’s Dina Asher-Smith, who took 100m silver behind Fraser-Pryce in Doha before adding gold in the 200m, will face Richardson in Gateshead.  Only the absence of reigning Olympic champ Elaine Thompson-Herah, whose 10.78 is #2 in the world this year, prevents a true Olympic preview, Letsrun.com stated. 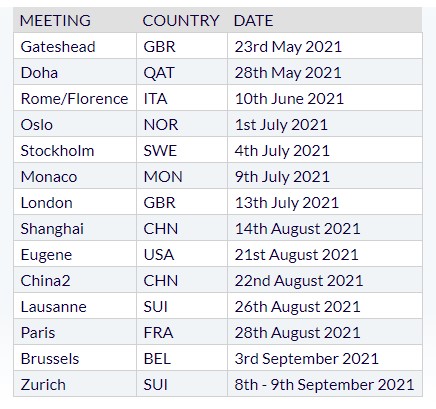 No, thanks.
How do you feel after reading this?
Tags: diamond league