(CMR) A 2004 Hummer H2 went up in flames near a service station in Homosassa, Florida, on Wednesday, after the driver reportedly stockpiled fuel in tanks in the back of the car.

The driver had apparently filled up the tanks in a panic-buying spree but didn't make it far before the fuel exploded, destroying the car.

The vehicle's driver had just filled up multiple containers of gasoline during what looks to be a panic-buying spree but didn't make it far from the pumps before the fuel ignited. Emergency personnel reportedly contained the fire in about 10 minutes after arriving.  Fire crews found four 5-gallon containers filled with gasoline in the back of the vehicle.

An injury was reported, but the person refused medical transport against the advice of on-scene workers.

The explosion's exact cause is unknown, but persons are theorizing that the driver may have lit a cigarette shortly after filling up the containers.

There have been panic-buying across several states since the Colonial Pipeline, which serves much of the eastern United States, shut down following a cyberattack late last week. Panicked citizens have been buying fuel in bulk resulting in thousands of service stations running out of gas.

Colonial has announced that its operations will resume soon, but people have still decided to buy enough in case there is a gas shortage in the coming weeks. 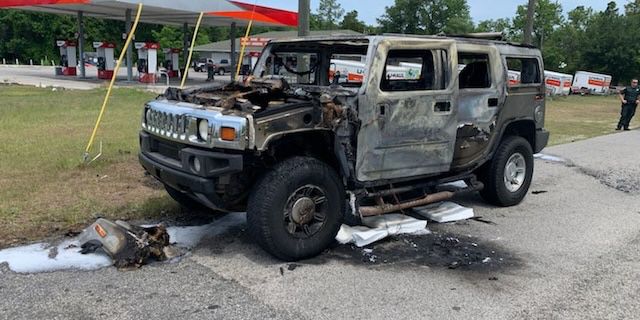 Over 125 people killed in Indonesia football stampede
What happens during the Period of Mourning for the Queen?
Former CNN anchor Bernard Shaw dead at 82
Last Amazon tribesman dies after 26 years alone
Share your vote!

No, thanks.
How do you feel after reading this?
Tags: gas shortage

(CMR) At least 125 people have died, and over 300 were injured in a stampede at an Indonesian football match...