Puts him on par with Cabinet Ministers

(CMR) The Progressives led government has taken care of several of their political appointees with high-paying political jobs within their administration including Alfonso Wright and Roy Tatum. Tatum, the Premier's Senior Political Advisor received a 40% salary increase since first getting the job in 2013. His gross monthly salary of $12, 619.48 is on par with some elected ministers.

That amount includes his 100% government contributed pension and a “hardship supplement” for $1,221.24 that was added to his salary by 2014.

Tatum is the highest-paid member of McLaughlin's inner circle according to a CIG Payroll Register. He currently makes $10,177 plus the hardship supplement. He also received full pension and health insurance benefits. The shocking revelation of his increase in salary between August 2013 and April 2018 has left many wondering what aspect of his job description would have demanded such an increase in salary. 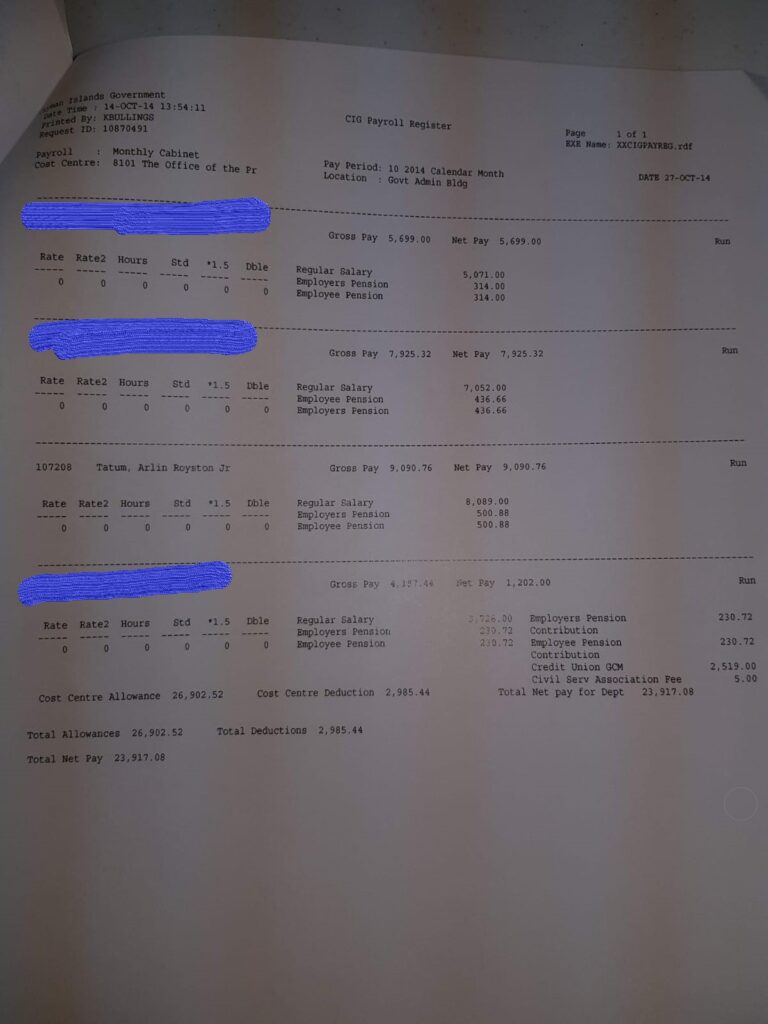 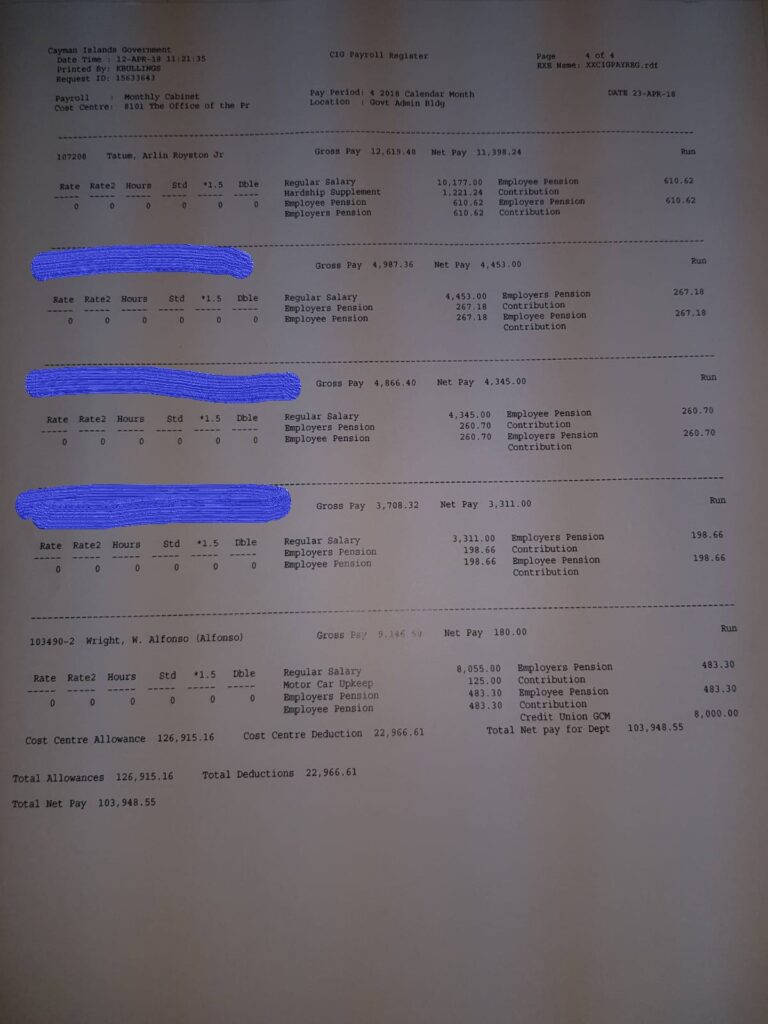 The Civil Service implemented a hiring ban in 2008 due to financial constraints. The Progressives have often applauded themselves for being more fiscally responsible than their predecessors the now-defunct United Democratic Party.

The Office of the Premier has several key positions including Senior Political Advisor, Press Secretary, Political Assistant and Personal Assistant which were appointed under Premier Alden McLaughlin's government in August 2013. Tatum is responsible for managing the office of the Premier and “acts as a liaison between the political realm, the public and the Progressive Party and will maintain regular contact with the Premier, Ministers and Councilors, as well as the Civil Service.

At some point, Head of the Office of the Premier was also added to his job title.

It is uncertain why he would need a hardship allowance as CMR understands that those are normally granted to Caymanians living overseas to cover rent, schooling etc. It was explained that they are giving to ensure “our people have every opportunity to succeed.”

Tatum has been a staunch supporter of the Premier and one of the original members of the PPM (Progressives) party. He often travels with the Premier both locally and internationally including the much criticized trip to Monaco for the annual luxury boat show in 2019. That same year he also traveled to London with the Premier engaged in constitutional talks with the United Kingdom.

He was also part of the delegation team that traveled to the UK and Brussels in September 2017 among other trips.

He received a meritorious service award recently for the COVID pandemic.

Alfonso Wright, is not part of the Cabinet office political appointments but still manages to pull in over $9,100 per month. The former elected member and Progressives stalwart was appointed as executive chairman of the Celebrate Cayman celebration in March 2018 after he lost his seat in the 2009 election. The event commemorated 60 years of our Coat of Arms. Despite that “national celebration” being long concluded, the Premier continues to find event projects for him to spearhead including the recent change over from Legislative Assembly to Parliament. Many have stated that his role appears to be that of Head of Protocol as he immerses himself in functions such as National Heroes Day.

In December 2019 Cabinet approved the reallocation of KYD $350,000 from the Portfolio of Legals Affairs to Cabinet Office for reimbursement of additional costs for various events and upgrades including the Celebrate Cayman function and upgrades to the National Heroes Square.

Whilst he is not granted a hardship allowance he does obtain a small mother upkeep allowance of $125.00 plus pension benefits.

Progressives files vote of no confidence
All omicron COVID restrictions in England to end
Governor asks that everyone puts politics aside and celebrate McLaughlin's knighthood
Premier Panton congratulates Alden McLaughlin on Knighthood
Share your vote!

No, thanks.
How do you feel after reading this?
Tags: Alden McLaughlinProgressivesRoy Tatum

TCHT: Armed officers on board with Cubans?