(CMR) Incumbent MP for West Bay West, McKeeva Bush has gone into full attack mode on Facebook this campaign season as some of his staunch supporters have now also taken to social media to call him out.

Ironically, Bush has warned newcomers to the political arena that campaigns are not won on social media.

On online several posts, Bush has attacked others expressing their viewpoints and support of other candidates including Arden McLean. Bush continues to take potshots at McLean the sitting MP for East End. Most assume it is because McLean called for the Premier to bring a Vote of No Confidence against Bush will ultimately lead to the early calling of the general election.

Whilst Bush may be attacking others on social media he is not being spared himself. Former UDP candidate and staunch supporter Velma Hewit expressed her disappointment in Bush last week. She penned a lengthy Facebook post stating that she is appalled at his inability to take responsibility for his own actions.

In a scathing review of his performance, she noted that hundreds of people continued to support him including her; even after he “did wrong” hoping that his behavior would improve. However, now she admits that:

“It seems we expected too much and we had set the bar too high for you!”

She continues that he has no one to blame for his current situation but himself and yet he still refuses to take any accountability for his ongoing behavior:

She goes on to call him ungrateful and should be reminded that all of his accomplishments he so readily claims were done from the public purse. He continues lamenting that the has brought shame on disgrace on Cayman as well as himself and should put an end to the “gutter politics”.

She appears to encourage him to seek professional help for what she notes are “serious issues” including gambling and alcoholism.

On a separate post, Bush attacked Arden McLean stating “He fought everything that would bring jobs”. That remark was responded to by several persons who brought up his abuse of a woman. He claims “I hit no woman” despite pleading guilty and being sentenced for multiple common assaults against a bar manager.

In the final analysis, he said he will have the last laugh as the people of West Bay West remain committed to re-electing the 36-year-old political veteran. 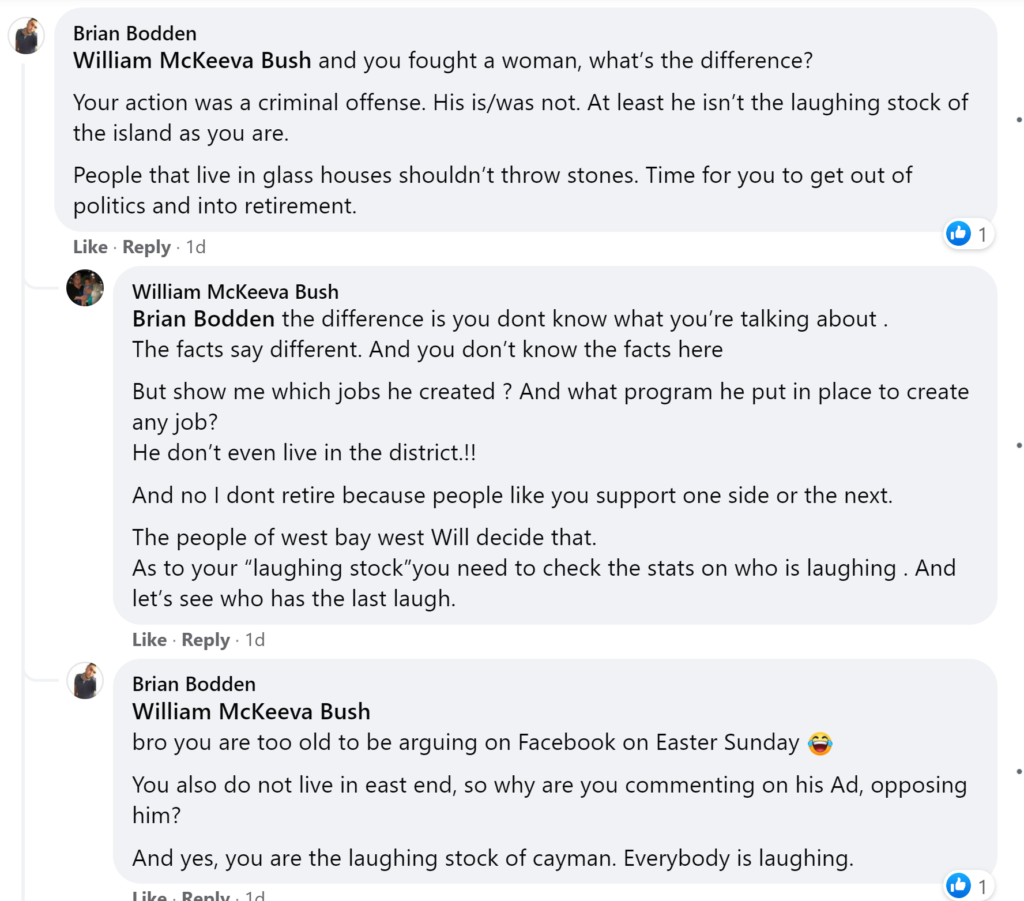