(CMR) Bridgeton fans have been left disappointed after it was announced on Friday that breakout star Regé-Jean Page, who played Simon Basset, the Duke of Hastings, is officially leaving the series after one season.

A letter penned by Lady Whistledown, which was posted on the show's Instagram page, confirmed that the Netflix hit would move on to season 2 without Page.

“While all eyes turn to Lord Anthony Bridgerton's quest to find a Viscountess, we bid adieu to Regé-Jean Page, who so triumphantly played the Duke of Hastings,” the note read. “We'll miss Simon's presence onscreen, but he will always be a part of the Bridgerton family.” 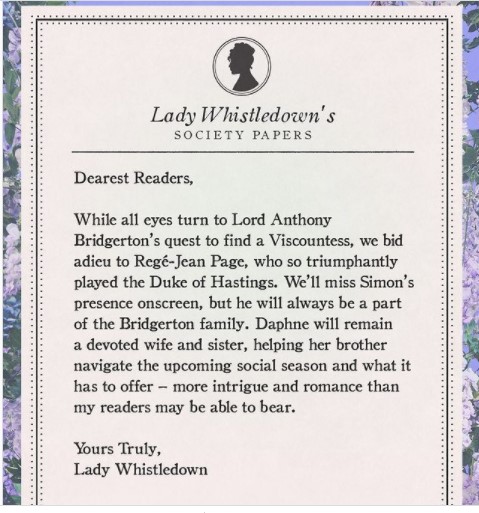 Page (31)  also posted on Instagram confirming that he would be leaving the tv show, which drew a large fanbase during its first season.

“The ride of a lifetime,” he wrote. “It's been an absolute pleasure and a privilege to be your Duke. Joining this family — not just on-screen, but off-screen too. Our incredibly creative and generous cast, crew, outstanding fans — it's all been beyond anything I could have imagined. The love is real and will just keep growing.”

No, thanks.
How do you feel after reading this?
Tags: Bridgerton