One of many McKeeva Bush memes

“I cannot believe that a 66-year-old man who has been in politics for almost 40-years can be so incredibly petty and immature. He believes that he and castigate and be disparaging of others but sadly cannot take what he dishes out. This is one case, if the DPP was inclined to prosecute it won't be won. Public officials should have thicker skin than Mr. Bush.”

(CMR) West Bay West Candidate and former Speaker of Parliament has filed a police report against Cayman Marl Road claiming that s.90 of the ICTA law has been breached after we shared a meme of him on May 2.

A police officer contacted Hill this morning about the allegations made against her on May 3. They claimed that Bush is upset about the posting which was in wide circulation.

The meme was received no less than 10 times from numerous sources throughout the day before being posted on social media at 6:33 p.m. Mr. Bush remains a favorite character for election memes as well as numerous other candidates; some of whom we have shared on our social media platforms.

Memes are now a common part of public and political life and are on the increase during any election cycle. In fact, an entire Instagram page has been created around the concept of election memes for the Cayman Islands.

CMR does not and has never created any memes but on occasion will share them since they are topical and very much in the public eye. The following meme was received no less than nine times. Hill provided this screenshot to the police to demonstrate how many times it was received: 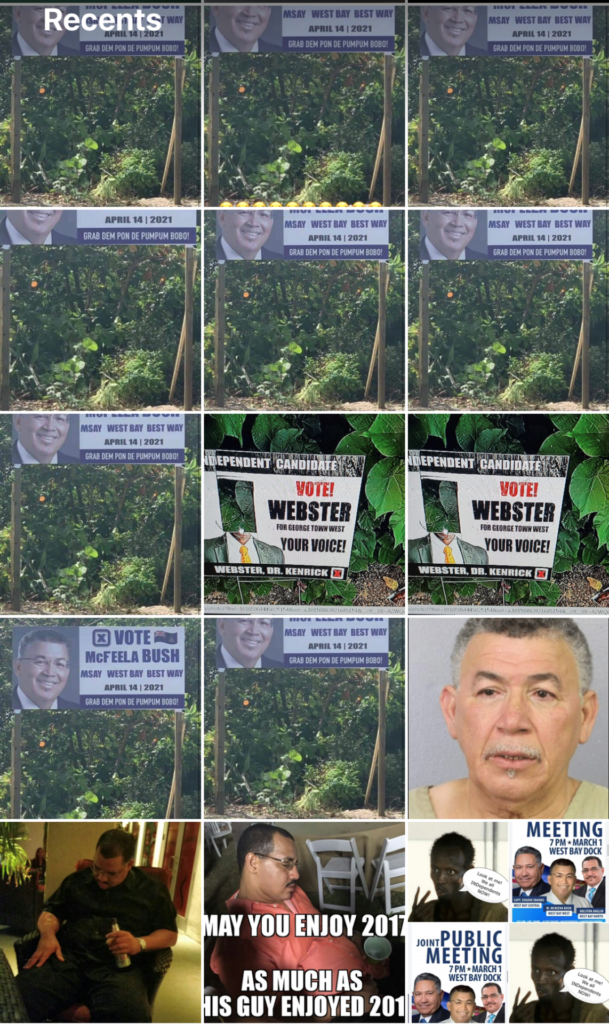 Speaking CMR, Sandy Hill shared her thoughts on the allegations:

“It appears to me that he believes a win against me and by extension CMR will somehow assist his political career. What s sad day for the voters in WBW and the Cayman Islands. We really should demand better of our elected officials.”

We are looking forward to the outcome of the police investigation. Bush is seeking re-election and has attacked his opponent Mario M. Ebanks on many occasions.

TCHT: Politicians have NO behavior!
Bush stressed ahead of criminal rulings
McKeeva Bush taken to hospital for chest pains
McKeeva Bush announces he will retire from politics
Share your vote!