(CMR) A Word Cup qualifying match between the Cayman Islands and Canada set to play at 4 pm on Sunday in Florida was postponed after the Cayman team failed to have the required COVID-19 tests done.

This is the second mishap that has left many wondering why the men's national football team appears ill-equipped as COVID continues to soar around the world. Last week, CMR received a tip that the men were traveling to both Suriname and Miami and had not yet received the full dosage of the COVID vaccine.

The Cayman Islands team encountered several challenges in their return from Suriname to the US on Friday, resulting in late landing, forcing the team to have rapid antigen tests done; however, FIFA requires PCR testing. As a result, the Group B match was rescheduled for Monday at 6 pm to give the team the chance to meet the COVID-19 protocols.

“This decision has been taken to ensure the safety of all participants in the match,” FIFA said in a statement.

Alfredo Whittaker, president of the Cayman Islands Football Association, said his team missed its scheduled testing upon arrival because of travel issues.

Reports are that the team had problems landing their charter flight in Florida on Friday after losing 3-0 on Wednesday in Suriname.

According to Sportsnet, the team's charter was originally scheduled to arrive at a private airport in Sarasota but was turned away by US Customs. The plane was then diverted to Miami but, as it was about to descend, the pilot was told he could not land because it was not a scheduled flight. The plane eventually landed in Tampa with the team not getting to its hotel until 1:30 a.m. local time Friday.

The team then resorted to rapid antigen tests to try to get their results before Sunday's match.

Whittaker explained, “we were subsequently informed that we needed a different type of Covid test and were unable to receive our results in time. We discussed this with FIFA and the Canadian Soccer Association who were very understanding of the situation and we mutually agreed to reschedule the match to Monday.”

Before each game, teams are required to provide FIFA with negative COVID-19 tests for all players and staff taken no earlier than 72 hours before accessing the venue.

Canada Soccer said it had “engaged a laboratory to be on-site with the team to conduct its testing” and that all of its players and staff had received negative testing before arriving and while in camp in Florida.

The Cayman Islands team has done the required tests and expects the results to be ready between 2 and 3 pm ET Monday, ahead of the 6 pm kickoff at the IMG Academy in Bradenton.

“The team is ready and there is a very positive mood within the group. We are looking forward to our match and we remain very appreciative of all the support from the wider Cayman Islands community,” Whittaker said.

CMR has also received complaints that the team has not received any local media coverage about this momentous occasion. One observer noted:

“Can you post about the Cayman National Team at the World Cup qualifiers? Such a shame those boys train so hard and it was not promoted here. Most countries would have had a send-off party.”

The team lost to Suriname 3:0. 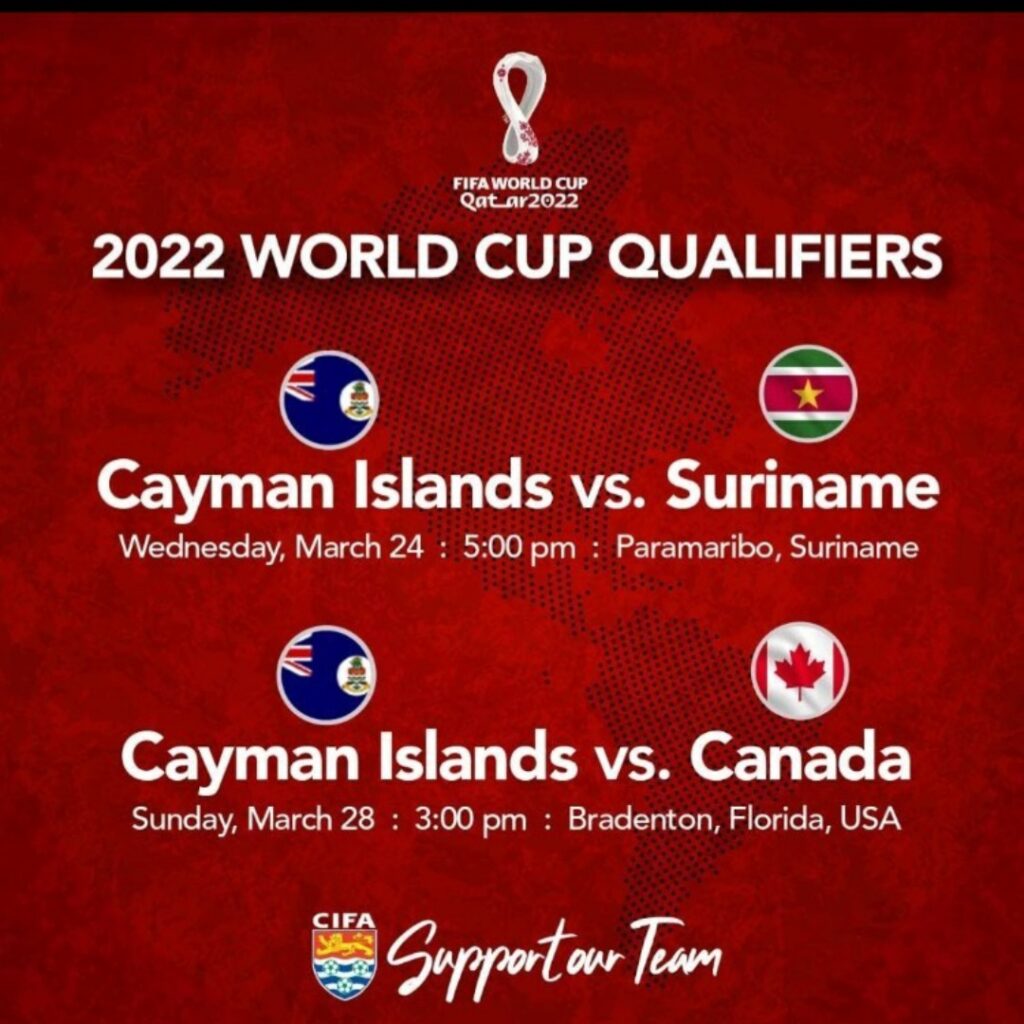 No, thanks.
How do you feel after reading this?
Tags: Cayman Islands Football AssociationFIFA