(CMR) Candidates will have an opportunity to participate in candidate forums starting with the district of East End on Monday.

The Cayman Islands Chamber of Commerce, in association with Foster’s, launches the first in a series of 19 virtual candidates' forums on Monday, 8th March at 7 p.m. Incumbent and former Leader of the Opposition Arden McLean, McCleary Frederick and Isaac Rankine will respond to national and constituency specific questions based on the findings of a public survey released by the Chamber in February.

The forums will be streamed live on the Chamber’s YouTube and Facebook channels. Cayman Life TV, Government Information Services (GIS), Cayman Marl Road and ICCI-FM will broadcast the forums. The forums conclude on Tuesday, 6th April for the George Town East constituency.

“The Chamber has organized forums before every election and by-election since 1988,” said Wil Pineau, the Chamber’s Chief Executive Officer. “Each forum gives voters an opportunity to compare the positions of the candidates. This is the first time that we will conduct the forums virtually which allows an online audience. All forums will take place at the Chamber’s main offices in Governors Square.”

Questions for the forum are based on the results of an online public survey released by the Chamber in February. More than 300 persons responded to the survey. More than 90% of the respondents identified themselves as eligible voters. Candidates will not receive any of the questions prior to their respective forum.

The Chamber hosts the forums as a public service to facilitate open dialogue on important national and community issues. All candidates have been invited to participate in the forum for their declared constituency. 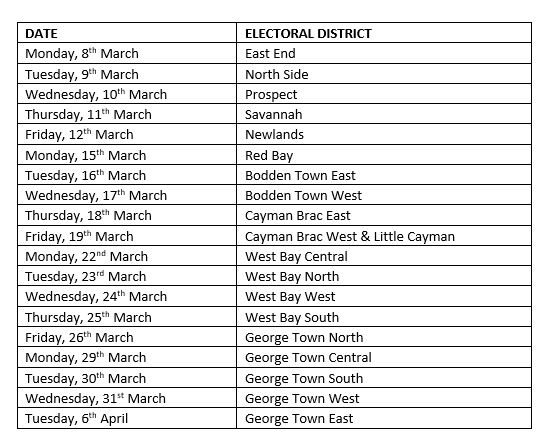 No, thanks.
How do you feel after reading this?
Tags: candidate forums