by Renae Stampp
in Court Cases
0

(CMR) Two Georgia Republican senators have joined those asking for leniency for Georgia teen Skylar Mack who was sentenced to two months jail time after breaking COVID-19 restrictions in the Cayman Islands.

The sentencing of Mack and her boyfriend Vanjae  “VJ” Ramjeet garnered international attention as her family members in several interviews with the US media have expressed that they believed jail time was harsh for the pre-med student.

Senators Kelly Loeffler and David Perdue sent a letter to the US Embassy in Kingston, Jamaica, on Christmas Day requesting that the embassy conveys to the Governor their support for Mack's family's call for leniency. The letter states,

“It is our understanding that Ms Mack has formally requested the Prerogative of Mercy and we wish to express our support for her family’s call for leniency.”

In the joint letter, the senators state that they supported the Cayman Islands' rights to enact regulations to  protect residents' safety and to impose “fair sentences against those who violate such restrictions.”

“However, it is the sincere hope of her parents that she can safely and expeditiously return home to continue her studies as a pre-med student at Mercer University. Her family has also expressed serious concern
about her safety, as she has received numerous threats against her life following the publicity of her case.”

It was not clearly stated in the letter what the senators wanted the Governor to do regarding Mack's sentence. 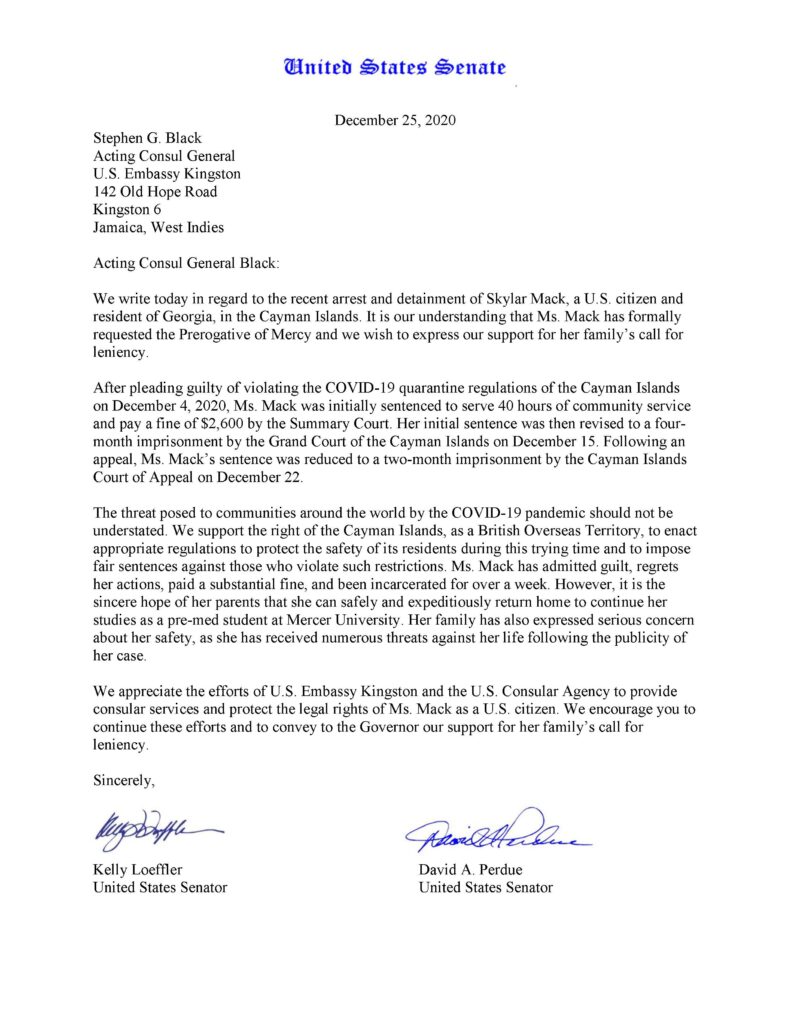 Mack and Ramjeet were charged and initially sentenced to community service after she broke quarantine to attend a jet ski event where he was competing.

She removed a government-issued quarantine tracking bracelet and attended the event where hundreds of people were in attendance.

After an appeal from the Director of Public Prosecution's office, a high court judge sentenced the couple to four months of jail time.

The couple filed an appeal and had their sentence reduced to two months by the Court of Appeal.

In the Cayman Islands, penal system inmates are expected to serve 60% of their sentence. Mack could be released by January 20, 2021.

Customs officer jailed for 9 months in ganja smuggling case
Caymanian on trial for attempted murder in the UK
Boat captain in deadly North Sound crash to be sentenced next week
Man posing as government lawyer convicted
Share your vote!

No, thanks.
How do you feel after reading this?
Tags: Skylar Mack

Caymanian on trial for attempted murder in the UK

(CMR) A Caymanian man accused of attempting to murder his ex-girlfriend in the UK after he stabbed her with a...

(CMR) Sean-Michael MacDonald (35) the captain of Pepper Jelly which was involved in a deadly boating accident that killed two...

(CMR) A man, claiming to work with the Attorney General's office, will spend three months in prison for perverting the...