by CMR
in Fury Friends
0

(CMR) A spate of dog poisonings has many in the community concerned after multiple dogs were found poisoned this morning in the West Bay area. There has been a general outcry by many to immediately report any suspicious persons to the police to put an end to the killings. A total of six dogs so far has been impacted by the poisoning.

Sadly a number of the dogs had to be euthanized and the remaining dogs are unconscious and being worked on by local vets with a poor prognosis. Online warnings have shared that most dogs were “out on a walk and picked up the poison” and not in anyone's private yard. Cayman Care has issued an alert on its social media page for all dog owners to take extra care to protect their pets. 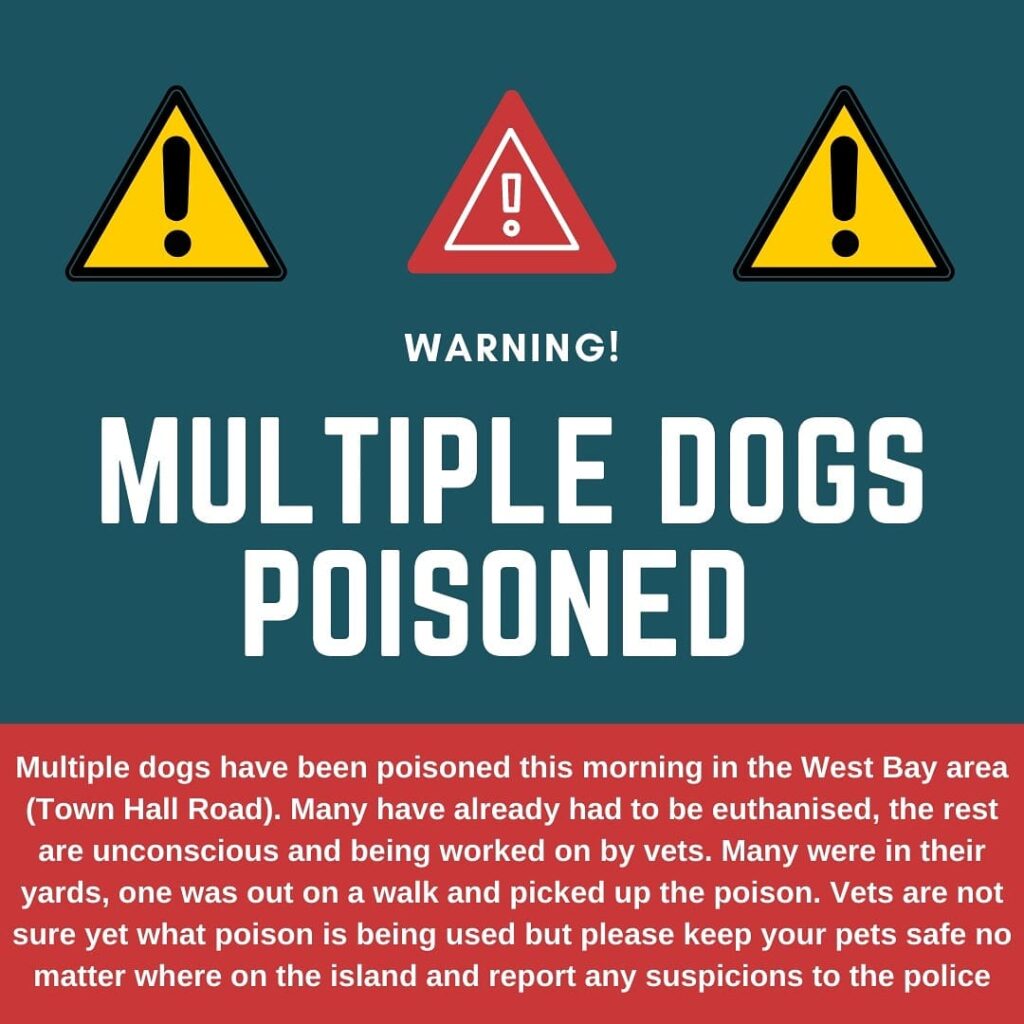 Suspicions are that the poison maybe some sort of toxin that has not been seen here before. The area of West Bay impacted included Town Hall Court, Northwest Point, Andersen/Conch Point Road. Shortly after 1:00 p.m. another dog passed away with others barely hanging on. Two dogs were poisoned close to the Oceanside Plantation condos where “brown meat” was found on the sidewalk in front of the garbage cans.

One poster shared that she recently lost two cats and suspects poisoning was the culprit.  Another poster on social media said they had a dog poisoned in the Britannia Clubhouse area as well.

Symptoms of poisoning in dogs can vary tremendously depending on the type of poison they’ve encountered. These signs can range from vomiting to breathing difficulties to drooling. Swallowed poisons, for example, often cause sickness, diarrhea, agitation and heart issues. It's a horrific way for a dog to die.

No, thanks.
How do you feel after reading this?
Tags: dog poisonings

Humane society rescue dies after being starved to death

"No animal should ever suffer so if you see something, say something. Report animal abuse to the Department of Agriculture."...

(CMR) The Department of Agriculture is reminding the public to be vigilant in its search for a raccoon that remains on...

(CMR) Calypso an African grey parrot has gone missing again - almost a year after he went viral for flying...

$1,000 reward offered for safe return of Ben the cat

(CMR) A $1,000 reward is being offered for the safe return of Ben the much-loved ginger cat missing from Waterways,...

(CMR) Residents in South Sound are pleading with dog owners to be responsible pet owners and not allow their dogs...

Man caught in a lie forced to sell PS5, initially told wife it was an air purifier