by CMR
in Business, Community Notices/Events
0
74
SHARES
Share on FacebookShare on TwitterShare on Whatsapp

“We are truly surprised that a two-story project slated for a low-density residential zone is being contemplated by the Department of Planning, especially given there are three commercial plazas at the bottom of Hirst Road. After the commercial corner at Shamrock and Hirst Roads, there is no commercial enterprise along Hirst Road going north into Newlands. Allowing this commercial project to go ahead will be setting a dangerous precedent for our whole Savannah-Newlands.”

(CMR) Residents in the Stonebridge area of Newlands are objecting to a 20,000 square foot two-story commercial building going into their neighborhood. The Central Planning Authority will be meeting on November 25 to hear the objectors which include several neighboring residential communities.

The proposed 35-foot high paints and parts store is slated to have 80 parking spots and a six-foot chain-link fence to accommodate an Ace store that would span the length of at least three homes in the Stonebridge community on Hirst Road.

The objectors have shared that they would not have invested in that area had they known that non-residential development would be permitted some 14-years after their housing development was begun by a local architect.

CMR spoke to landowners and the consensus is unanimous – none of them want the facility in their neighborhood.

The long list of reasons why they do not believe the property is suitable for that location will be submitted to the CPA later this month.

Some concerns include increased traffic, various security concerns, loss of privacy and potential noise and disturbance for homeowners. One homeowner shared:

“I chose to live in a quiet, family-oriented neighborhood zoned low-density residential because peace, privacy, security, and safety are priorities for my family. All of this will now be destroyed if this building is permitted in our backyards.”

The proposed site is on a curve in the road with no available sidewalks for the safety of pedestrians and cyclists; in particular school-age children.

Homeowners are already struggling with traffic on the roads and shared they cannot imagine how further commercial development in such a clustered area would improve anyone's quality of life. Another objector shared:

“An industrial style business that would now have construction and heavy equipment vehicles in and out of the area would add considerable traffic to Hirst Road and further negatively impact the entire neighborhood.”

Some have also questioned the need for the facility given that there are already three other commercial plazas at the intersection of Hirst Road and Shamrock Road including the busy Countryside Plaza and newly opened Country Corner. Countryside Plaza already had a Napa parts store and ALT Thompson's in the same plaza sells paints – both products the ACE store would be selling.

CMR understands there is a second phase planned for Country Corner at some point. 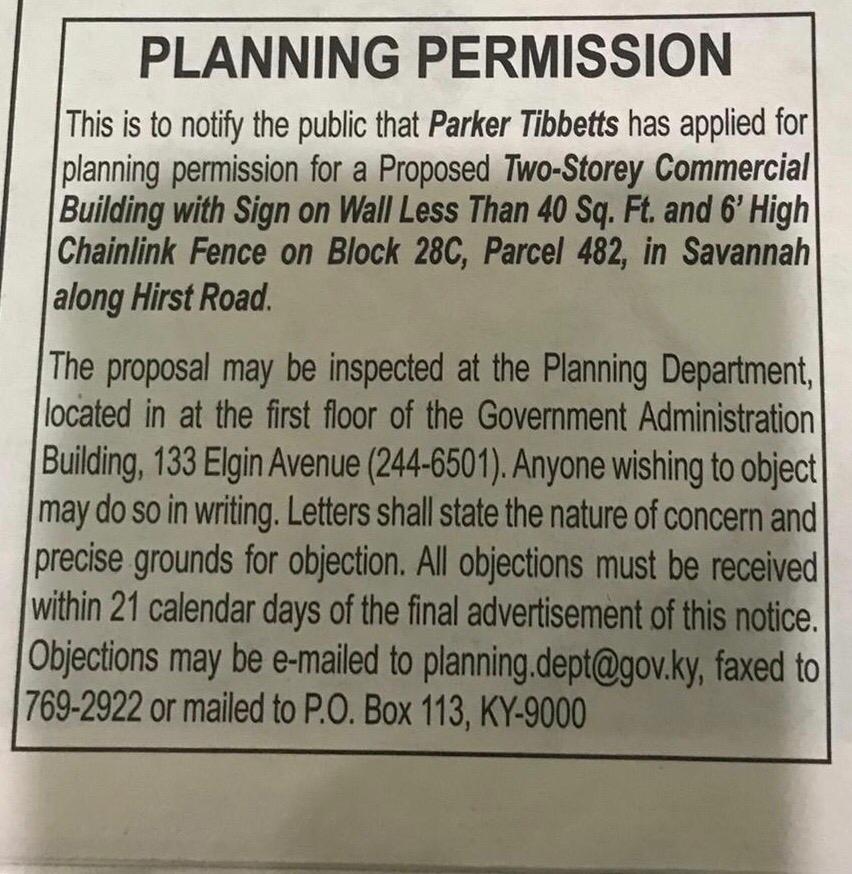 No, thanks.
How do you feel after reading this?
Tags: ACENewlandsParker TibbettsStonebridge

(CMR) The Cayman Islands Coast Guard (CICG) is advising members of the public to heed storm warnings, avoid the water...

(CMR) Cayman Airways has canceled several flights while adjusting the times for others as Tropical Depression Nine is expected to...