AG says speaker has no legal standing to do so

“You can't just come because you're a committee and think you can lay a report that goes out publicly that has all matters connected to it and all sorts of thing said in it without the speaker having chance to examine the report and so when the report is laid the speaker makes that announcement “so ordered”. If I don't give that then it's not ordered to be laid on the table.”

The Hon. McKeeva Bush, Speaker of the Legislative Assembly

(CMR) The Speaker of the Legislative Assembly unilaterally decided to stop a Public Accounts Committee (PAC) report does not appear to be in keeping with any legislative powers that he has under the Constitution. The Speaker was trying to stop a PAC report on the Efficiency and Effectiveness of the Utility Regulation and Competition Office (OfReg).

This was the first time that any Speaker of the House has refused to accept papers that have gone through the correct procedure to be tabled causing great criticism that he was acting arbitrarily and without any legal authorization in the Cayman Islands, UK or the Commonwealth.

It was explained that the Business Committee which is chaired by Premier Alden McLaughlin and consists of six other members of the legislative assembly which sets the agenda and order paper for the Legislative Assembly approved for it to be tabled. The Premier is also responsible for OfReg.

There were four reports previously presented by Ezzard Miller, Chairman of the PAC and he observed that the fourth report was not on the order paper before him. The Speaker replied:

Miller then questioned what standing orders authorized the Speaker of the House to refuse a report of a standing committee of the house to be tabled. The speaker then doubled down and said the speaker has to verify the report before it can be laid.

Once a report is tabled it attracts parliamentary privilege and if it is the case that something is wrong with the report, the correct procedure is for the members of the house to move a motion against the report being table. Then the report would be debated and voted upon. A tabled report becomes a public document and many are wondering what protections the Speaker is trying to afford OfReg who was highly criticized during their PAC appearance in mid-July.

However, it appears that Miller was still not in agreement that such an action was permissible and obtained the advice of the Attorney General on the matter. The PAC chairman shared correspondence from that office which confirms that Bush acted ultra vires the constitution and in contravention of the standing orders: 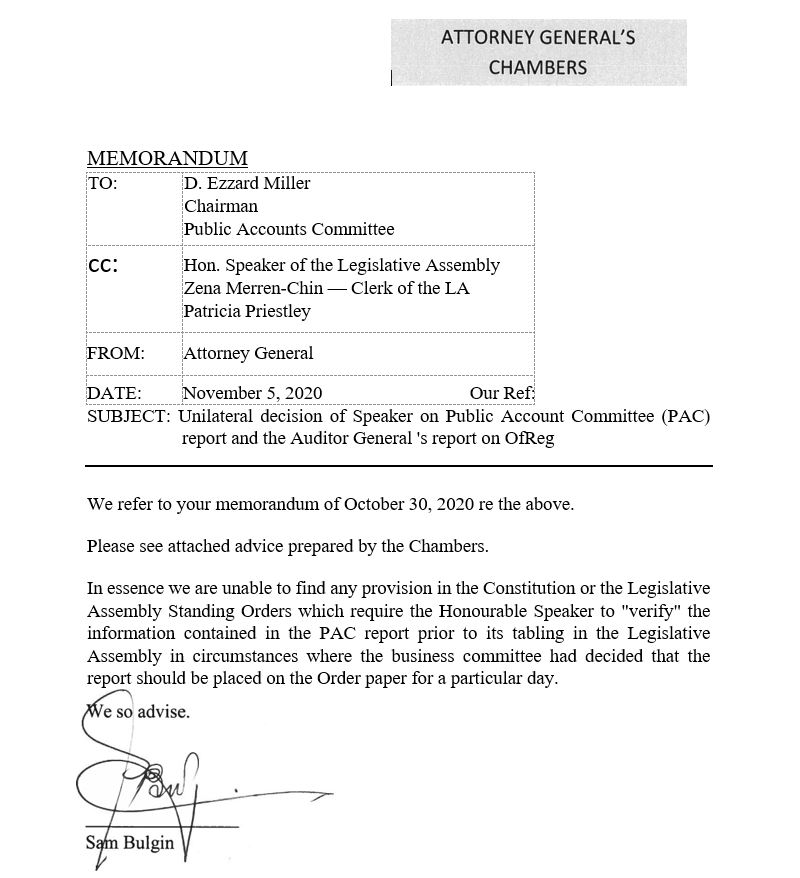 The public is very concerned with the unilateral decision of the Speaker of the Legislative Assembly to stop the Chairman of the Public Accounts Committee (PAC) from tabling the Office of the Auditor-General and the PAC report on the Efficiency and Effectiveness of the Utility Regulation and Competition Office (OfReg).

The PAC wishes to assure the public that these two reports are very important and that the reports deal with matters that affect the daily lives of Caymanians and residents. The PAC also wishes to remind the public that the PAC is a Standing Committee as authorized by the Legislative Assembly Standing Orders (2018 Consolidation).

The PAC wishes to place the facts before the public which are as follows:

The PAC wishes to inform the public that the reports under reference have all been prepared in accordance and in compliance with all the relevant Standing Orders and in the spirit of natural justice and that the reports contain no inflammatory language and that all its recommendations are fully supported by evidence contained in the verbatim transcript of the public hearings.

The report will be tabled again when the house reconvenes in early December.

Wilks expected to be speaker
McKeeva Bush announces he will retire from politics
Former speaker being investigated for decades-old sexual assault
Russia adds the Cayman Islands to unfriendly list
Share your vote!

No, thanks.
How do you feel after reading this?
Tags: Ezzard MillerMcKeeva BushOfRegPublic Accounts Committee