“As legislators and political leaders, we must be mindful of mortgaging the future for the temporary convenience of the present.”

(CMR) The Legislative Assembly was full of theatrics and passionate speeches most of the day on Thursday as members of the legislature debated a pension motion brought by MLA Chris Saunders (BTW). The private member's motion ultimately failed but not before Premier Alden McLaughlin accused the opposition of being clueless about “basic economics”.

The opposition was undeterred in their position and ultimately accused the Premier and the rest of the government of starting the campaign and “silly season” early.

The motion was asking for the legislative assembly to establish a “select committee to review the impact of the recent changes to the National Pensions Law and make recommendations to ensure the adequacy and viability of the pension funds registered in the Cayman Islands.”

Saunders explained that during the COVID-19 pandemic it became obvious that pensions in the Cayman Islands are in serious trouble and legislators have an obligation to think about the long-term viability of the plans. He admits that the recent $400 million-plus withdrawal allowed by the emergency pension provisions in just 3 months has only further highlighted what has been long-standing challenges. 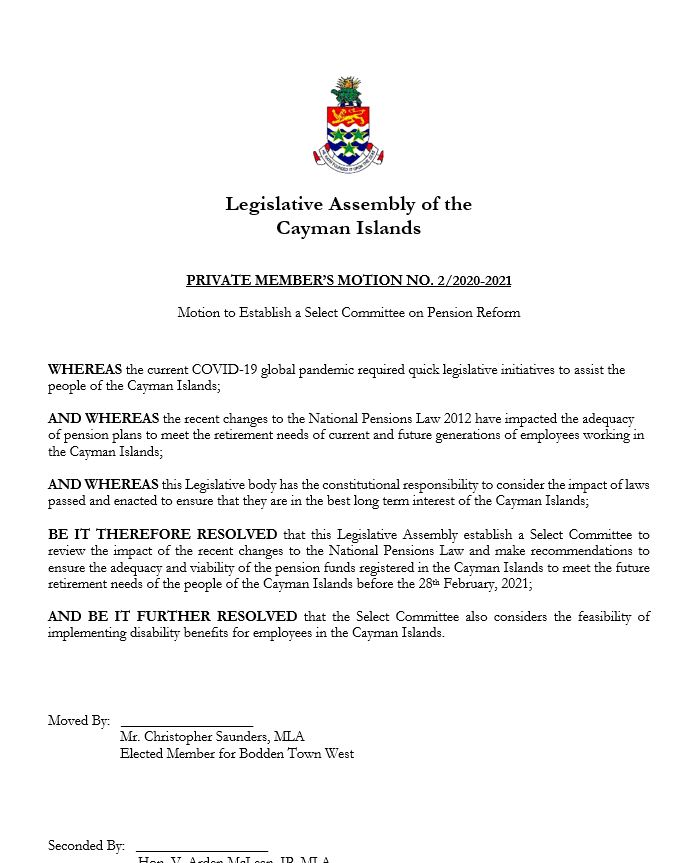 The premier followed with an impassioned speech where he shared the opposition needs to be “consistent in their messaging” and forcing companies to increase contributions at this time would bankrupt companies meaning there would be “no jobs for anyone”. He said he was not prepared to do anything that would increase the cost of doing business in the Cayman Islands at this time.

Sharing that “timing is everything” he does not believe that the time to address these issues is during a global crisis. He challenged the opposition asking “what kind of economic principles” were they operating under. Despite those strong initial words, the premier admitted that “we do need a revamped pensions system, but now is not the time to do that.”

He also indicated the government was in the final stages of appointing a new National Pensions Board that will be tasked with recommending future policy changes that will eventually address these concerns and that “the government is ahead of him (Saunders)” in dealing with the matter.

However, the opposition was not deterred by these comments as Saunder retorted “we have a responsibility to lift up every Caymanian no matter where they stand we need to start somewhere.”

In comments to CMR Saunders shared that this was merely the first step in what would undoubtedly be a long and arduous process. He explained that he was not calling for an increase at this time but merely that a committee is set up to work towards a viable system in the future.

Opposition leader, Arden McLean also weighed in on the issue sharing that it was not his intent to speak on this motion but he was moved to do so after hearing the premier's comment. He reminder the LA of the premier's tactic of opposing all motions brought by the government when he was in opposition for “political expediency”.

He noted that the premier “cannot and will not be reformed … and nothing is good enough for him that anyone else does … he is the only one that has a crown on his head unless he handpicks them and he can control them”.  He beseeched the premier to be more supportive of younger and less experienced members of the legislative assembly.  He accused McLaughlin of wanting to stay in power and not thinking about the people and their future.

McLean mentioned that perhaps the premier was pandering to the business sector to secure funding for his upcoming election. This comment received a warning from the Speaker of the House McKeeva Bush about making accusations.

He clarified that no one is proposing any immediate increases to pension contributions.

The member for Newlands, Alva Suckoo, also spoke to the matter sharing he saw no harm in setting up a select committee as had recently been done for district councils. He shared that “I had to grab my motion to see if we were debating another motion” and accused him of twisting the words of Saunders.

The motion failed with 9 no's, 5 aye's and 4 absent votes. All present members of the Unity Government voted against the motion.

No, thanks.
How do you feel after reading this?
Tags: Christopher SaundersMLA Alva SuckoopensionV. Arden McLean