(CMR) Four days after Cayman Marl Road warned the local community about the commitment circle pyramid schemes we have received confirmation that one has now gone bust! The group of at least 200 persons has been informed by the organizer, Jacqueline Smith, that she will no longer be continuing with the program after just three months.

Several upset investors have now reached out to CMR with their frustrations calling the organizer a “thief” and noted that in October she is headed to England for a vacation.

The horrific news comes after the pyramid scam was growing quickly in the Cayman Islands with several groups in operation. Apparently, Smith at least 200 people in hers and was encouraging people to continue to sign up until a shocking message was sent out earlier this evening.

The premise of the scheme means that they must constantly have new incoming members willing to pay into the scheme in order for others to receive their huge payouts or gifts. As predicted it wouldn't be long before people started to either back out or newcomers dry up. It uses words like “flowers” and “gifts” and “fires” to get people engaged in the process.

The following message was sent out this evening stating that:

“As you all have noticed, there has been a lot of negative information circulating regarding this Gifting Program. As a result, more than 90% of the flowers that were split over the weekend are incomplete (missing fires). This Gifting Program has been entirely dependent on new fires in order to continue. Unfortunately, this means we will have to discontinue with the program. Despite the fact that we all entered with an understanding of what a GIFTING Program entails, there are still persons requesting a refund of that Gift. Please note there is no guarantee that anyone will receive a refund. However, those persons that gave a gift but did not receive any gifts may attempt to contact their gifted person. Please review your receipt to see who your gift was given to. The contact number for that person is available on your WhatsApp group. Kindly note that all admins served only to coordinate the flow of this program and is NOT responsible for any refunds. You must contact your gifted persons yourself. Anyone with a desire to continue in this program may do so on their own accord. However, these flowers will be closed officially and deleted on Friday, September 25th 2020 at 5 pm. We are all affected by this and we are truly sorry for any inconvenience. We wish you all the best. Stay safe everyone and enjoy the rest of your day.”

This message has left people upset and out of $500.00. After sending out the WhatsApp message she immediately closed off the group from further comments. No one can respond to her and apparently, she will be deleting the group on Friday evening at 5 p.m.

Apparently, the organizer was taking a $100 cut for “paperwork” to get people into the program. The paperwork involved “putting people's names on a piece of paper”. The remaining $400 was the person's contribution to the gifting program. The group is said to have around 200 people in it and she had 64 flowers and each flower had 16 people. By our calculations, she may have received upwards of $20,000.00 plus being:

After CMR issued a warning that the police were actively assisting an FBI investigation in relation to this type of scheme a voice note was sent around stating that we were wrong and trying to scare people. People were encouraged to remain in the program assuming them that police officers have given their blessings and that even the Cayman Islands Monetary Authority told organizers it was not illegal and sanctioned it. CMR attempts to verify either of those proved to be a complete waste of time as neither agency knew anything about it.

Her message clearly states that people knew what they were getting into and there would be no refunds or liability on her part.

She has responded to CMR with the following:

She further claimed that she is not leaving the island and “at a point, I'm willing to pay some of these people”. She provided proof that some persons received money back: 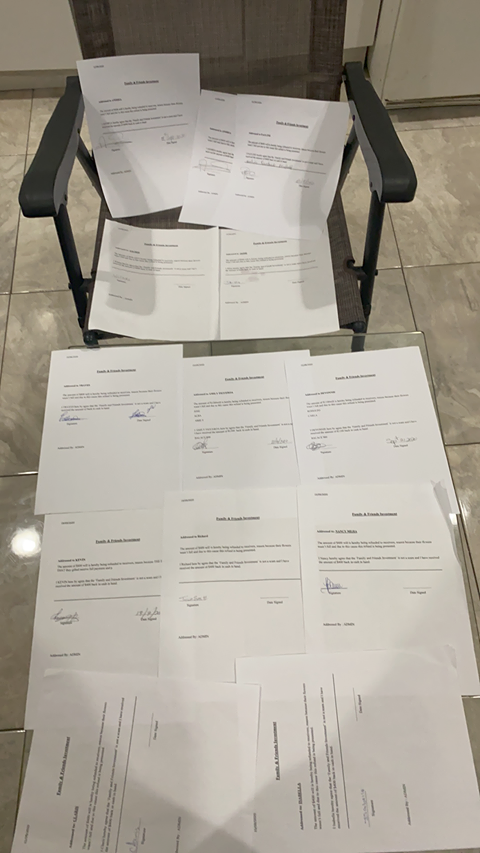 CMR understands there are other gifting groups still in existence and their members remain optimistic.

No, thanks.
How do you feel after reading this?
Tags: gifting circleJacqueline SmithPonzi schemepyramid scheme

(CMR) Reed Parker has been identified as the stapler thief featured earlier today in an article for stealing a stapler on Monday at...