(CMR) Jorge Eduardo Falcon (53) of Pinecrest, Florida and Leonardo Leandro Cornide of Coral Gables, Florida have been removed as directors of Premier Assurance Group SPC Ltd. (PAG) by the Cayman Islands Monetary Authority (CIMA). Their original license was issued in July 2012 despite the fact that the U. S. Securities and Exchange Commission (SEC) had previously shut down the pair in 2005 for alleging defrauding more than 3,400 investors of $127 million. 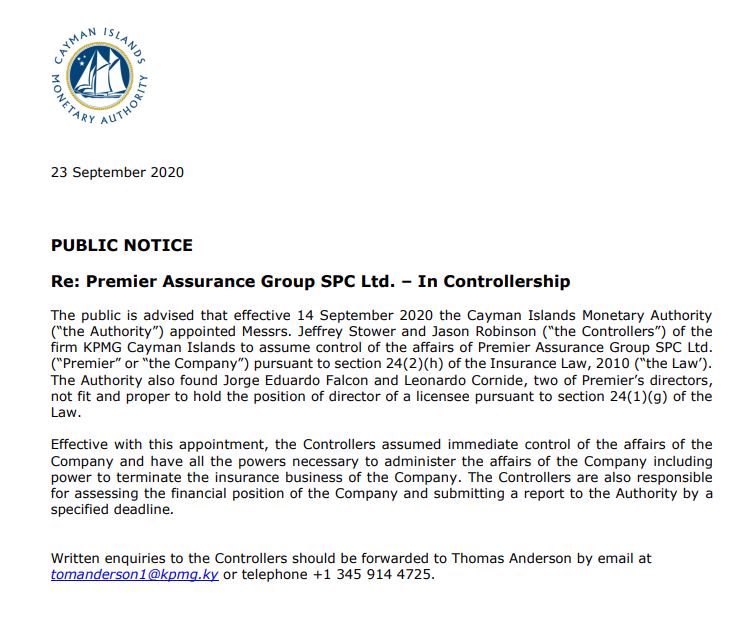 Their conclusions are largely based on a current cease and desist order and SEC investigation. The history of some of the parties with the SEC appears to span some 15 years and multiple entities. However, they used CIMA to boost their company's credibility on their website:

In March 2005, the SEC brought charges against them noting that institutional investors such as the Guatemalan social security and military pension funds were among the victims of the scam.

“The defendants have failed to disclose to investors that their entire investment program is a sham designed to enrich themselves and their agents,” the SEC complaint charged.

U.S. District Judge K. Michael Moore, responding to the civil complaint, froze bank accounts and other assets belonging to Cornide and others, issued temporary restraining orders and appointed Thomas G. Schultz as receiver for a handful of related financial companies that Cornide founded in Florida and the Cayman Islands. Federal authorities shut down four firms including two registered in the Cayman Islands.

The complaint alleged that Cornide and his partner misappropriated more than $15 million of the money for themselves. Cornide settled the complaint by agreeing to pay $11.2 million but “without admitting or denying the allegations”.

Cornide and Falcon are now the subjects of additional SEC administrative proceedings as CIMA issued a public notice today appointing KPMG as comptrollers pursuant to section 24(2)(h) of the Insurance Law, 2010. CIMA has found them to be “not fit and proper to hold the position of director” after what appears to be a substantial history of SEC action against the pair.

They had previously been accused of advising a fund to invest in an entity they co-owned without disclosing that fact and that entity also made loans to the two men. PAG offers life and health insurance and claims to be “an innovative company with a proven record of financial stability and growth.” The company has it's addressed listed as Sussex House, Suite 200 at 128 Elgin Avenue.

Despite these claims, in 2019 the SEC issued financial enforcement action against the pair for failing to disclose conflicts of interest when advising the insurance company to invest up to 25% of its investment reserves in a note with Silverback Capital Partners, LLC which was then used to finance third-party investments in Florida real estate. Both men own and control Silverback and stood to profit directly from the profits from Silverback's real estate backed loans.

They were also alleged to have used Silverback for personal loans of over $6 million; which Silverback borrowed from PAG. The SEC held that “since Respondents did not disclose these conflicts and get client consent to the conflicted transactions, Respondents violated Section 206(2) of the Advisers Act.”

Initial payments were made and a four-installment payment plan was permitted.

Despite all of these issues, PAG was announcing partnerships with the likes of Lloyd's London in 2014. Now believed to be insolvent they claimed that PAG was:

“Protecting our clients' health with worldwide coverage to helping them achieve a successful financial future, PA Group creates financial security roadmaps for life's most significant events. For over 18 years PA Group has guided and protected our international clients with comprehensive health and wealth accumulation solutions.”

In February 2017 they launched two international health care products in Jamaica, CaribCare and CaribCare Plus; promising to provide Jamaicans with “worldwide protection that gives piece of mind”. A press release at the time claimed that:

Jamaicans will therefore be able to tap into health coverage anywhere around the globe, with access to medical facilities in over 200 countries through the most recognised provider networks available.

Cornide and Falcon are equal 50% owners of PAG, an offshore health and life insurance company. Silverback Midtown, LLC was incorporated as a Florida Limited Liability company on May 1, 2015. Premier Assurance Group, LLC was set up on August 24, 2007 in Florida.

In 2016 Cornide was appointed chairman of the PAG and was found online expressing confidence in the company's decision to bring on new talent to the company.

Both men are now directors of Beast Capital LLC of a Coral Gables, Florida address which was formed in October 2019. 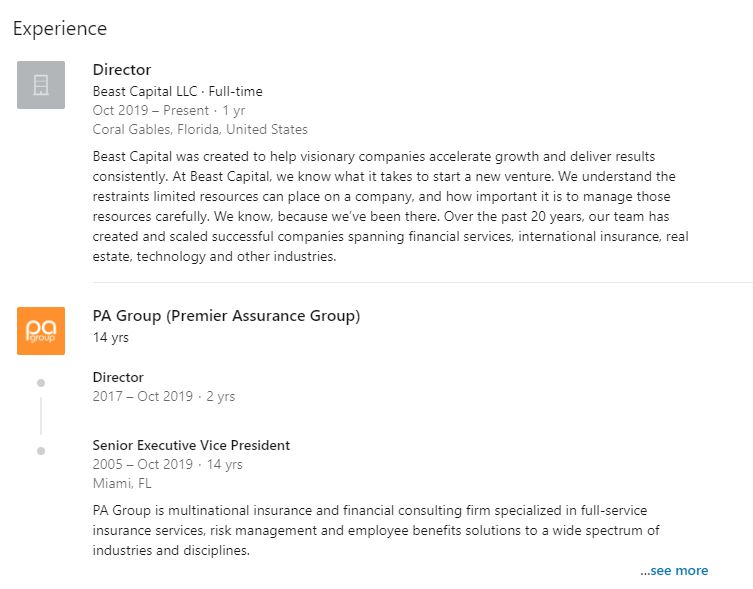 No, thanks.
How do you feel after reading this?
Tags: Cayman Islands Monetary AuthorityJorge Eduardo FalconLeonardo Leandro CornidePremier Assurance Group SPC Ltd