“A true fighter, Chadwick persevered through it all, and brought you many of the films you have come to love so much,”

his family said in the statement.

(CMR) Black Panther leading actor Chadwick Boseman has passed away Friday at 43 after it was revealed he had been battling cancer for four years. He died at home in Los Angeles with his wife and family by his side.

The news has begun to shock many in the entertainment community and beyond as he had not spoken publically about his diagnosis, in fact, he work through most of it including in his most notable role as the Black Panther.

Boseman first came to prominence playing real-life black iconic figures – baseball great Jackie Robinson in 2013's 42 then as musician James Brown in 2014's Get on Up. 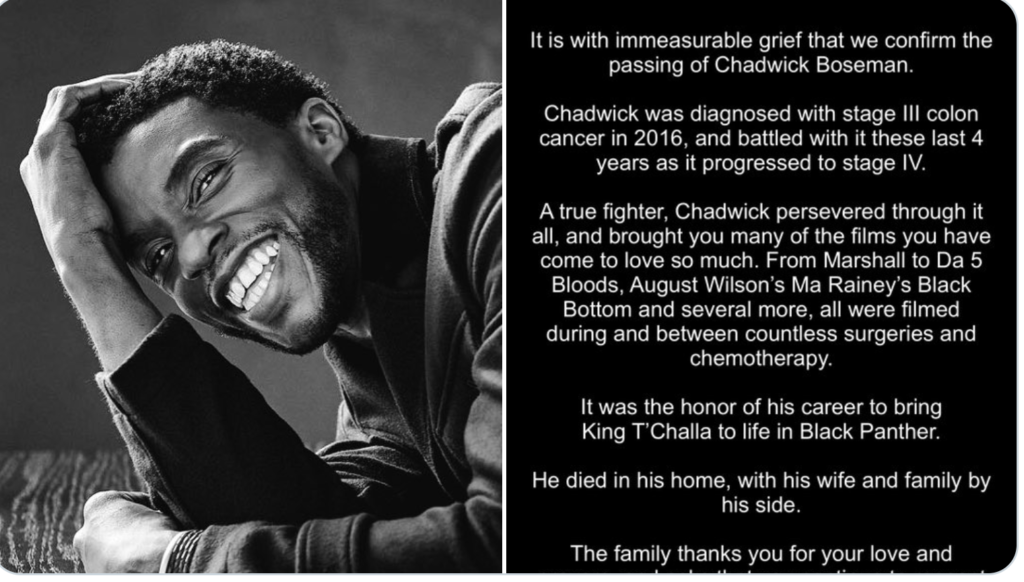 However, it will be as the titular Black Panther in the blockbuster 2018 film he will be best remembered. His T'Challa character was first introduced to the blockbuster Marvel movies in 2016's Captain America: Civil War, and his “Wakanda forever” salute reverberated around the world after the release of Black Panther two years ago.

The film was the first superhero film to get a nomination for best picture – and six other awards – at the Oscars.

Born in South Carolina, Boseman graduated from Howard University and had small roles in television before his first-star turn in 2013. His striking portrayal of the stoic baseball star Robinson opposite Harrison Ford in 2013's 42 drew attention in Hollywood.

No, thanks.
How do you feel after reading this?
Tags: Black PantherChadwick Boweman