Storm will come within 100 miles of Cayman Brac

(CMR) Cayman Airways Ltd. has put on additional flights to Cayman Brac as Tropical Storm Laura is forecasted to come within 92 miles of the sister island. The sister islands are now under a tropical storm warning for tomorrow.

The flights are scheduled for this evening and intended to be evacuation flights for anyone wishing to return to Grand Cayman before the storm closest approach which is scheduled for Monday, August 24. 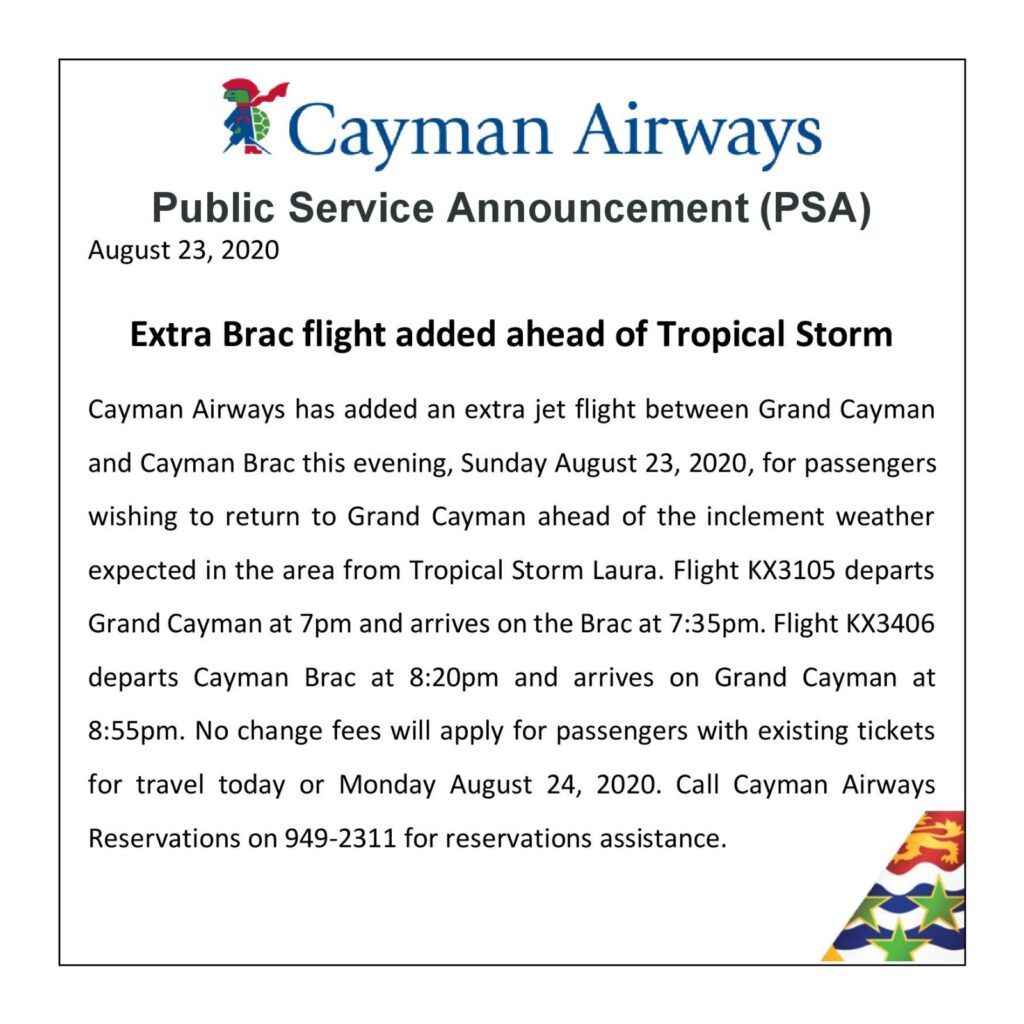 The 4:00 pm advisory from the Cayman Islands National Weather Service has noted that Tropical Storm Laura was located near Latitude 19.5 North, Longitude 75.2 West, or about 300 miles east of Cayman Brac and 403 miles east of Grand Cayman.

The storm is moving towards the west-northwest near 21 mph with maximum sustained winds of 60mph. On this track, Tropical Storm Laura is expected to at its closest point of approach be near 92 miles north-northeast of Cayman Brac by around 5 am tomorrow, Monday, August 24th.

Conditions expected over the Sister Islands:

Squally conditions with higher gust are also likely over the Sister Islands during this period.  Wind direction is expected to be from the north-northwest tonight, backing towards south-southwesterly by morning, south-southeasterly by afternoon and becoming southeasterly 15 to 20 knots by tomorrow evening.

Moderate to locally heavy showers are expected from tonight through tomorrow evening as Tropical Storm Laura moves south of Cuba. Rainfall accumulation estimates near 1.5 inches are expected for the Sister Islands can be expected over the next 24-36 hrs and FLOODING OF LOW LYING AREAS ARE LIKELY. Residents in these low-lying areas should take the necessary precautions.

Seas conditions over the Sister Islands are expected to be slight to moderate with wave heights of 2 to 4 feet through early night, becoming rough with wave heights of 6 to 8 feet tomorrow morning. ALL MARINE INTEREST OVER THE SISTER ISLANDS SHOULD SEEK SAFE HARBOUR AND REMAIN THERE UNTIL AT LEAST TOMORROW EVENING.

Over Grand Cayman, conditions are expected to be a bit more subdued with Tropical Storm Laura expected to pass about 156 miles north-northeast of Grand Cayman at its closest point of approach. The winds direction is expected to be northerly tonight, backing towards the west-southwest by tomorrow morning, southerly by afternoon and becoming southeasterly 15 to 20 knots by tomorrow evening. Higher gusts are likely in and around heavy showers.

Rainfall estimate for Grand Cayman suggests accumulations of 1 inch are likely through tomorrow evening. Showers may be locally heavy at times.

Seas of Grand Cayman are expected to be slight to moderate with wave heights of 2 to 4 feet and become rough-in and around heavy showers over the next 24hrs. While the risk to marine interests in Grand Cayman might be low at this time, extra caution should be taken through the next 24hrs.

The next bulletin will be issued at 10 pm tonight.