Port: No cruise ships to Cayman til 2021

No cruises for remainder of 2020

1k
SHARES
Share on FacebookShare on TwitterShare on Whatsapp

I wish to inform you that after careful consideration, the Cayman Islands Government has taken the decision that in the current global environment with respect to the coronavirus pandemic, it cannot allow the resumption of cruise tourism in the Cayman Islands for the immediate future.

(CMR) The Cayman Islands will remain closed to cruise visitors until at least the end of the year it was revealed today.

The revelation came by way of a letter from the Acting Port Director of the Cayman Islands Port Authority, Joseph Wood. In the brief letter addressed to cruise industry partners, he confirmed that the government has made the decision to close Cayman to all cruise tourism until December 31st. 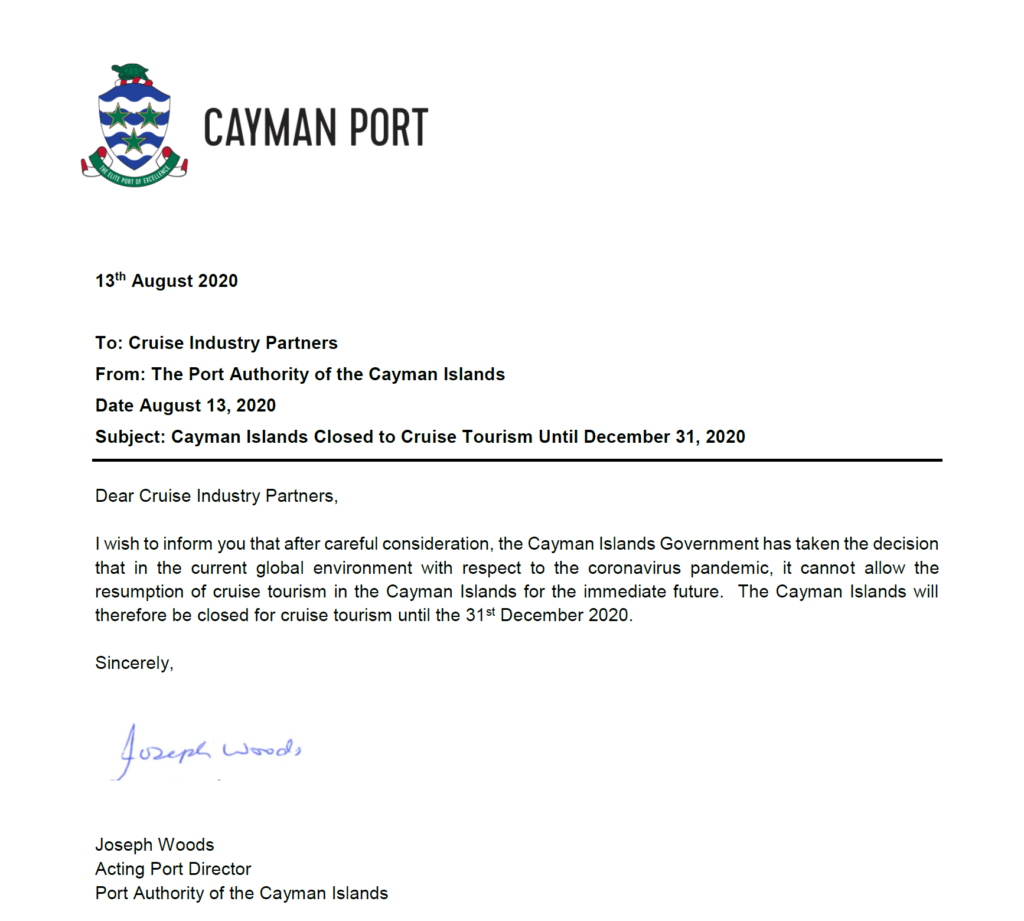 The news comes amid an ongoing surge in the virus around the world but in particular, the United States which saw its highest single death toll of almost 1,470 Wednesday. Despite the Center for Disease Control advising Americans not embark on cruises at this time the major cruise lines appear to be pushing for travelers to take the risk.

August 3 it was confirmed that at least 41 passengers and crew on a Norwegian cruise ship have tested positive for Covid-19 with hundreds being placed in quarantine. The ship, which belongs to the Norwegian firm Hurtigruten, docked in the port of Tromso in northern Norway on Friday. They have since halted all leisure cruises because of the outbreak and claimed that their systems failed:

“This is a serious situation for everyone involved. We have not been good enough and we have made mistakes,”

Chief Executive Daniel Skjeldam said in a statement on Monday

The MS Roald Amundsen had been on a week-long voyage to Svalbard in the Arctic, and was also reportedly scheduled to visit ports in England and Scotland in September. However, four crew members were admitted to the hospital on Friday with coronavirus symptoms, shortly after the ship docked in the Arctic port of Tromso, and they later tested positive for the virus.

Another 32 crew members on board were found to be infected. The staff who tested positive included German, French and Filipino, citizens. While they were tested before leaving their home countries they did not quarantine before starting work on the ship.

Some 180 were permitted to leave the ship on Friday leaving authorities scrambling to locate them over the weekend.

It has generally been excepted that cruise lines have done a horrendous job handling the coronavirus outbreak from the onset.

No, thanks.
How do you feel after reading this?
Tags: Cayman Islands Port Authoritycruises

(CMR) Minister of Tourism for the Cayman Islands, Hon Kenneth Bryan, was elected as the new Chair of the Caribbean...