Skip and I met with Moses, and after about four lines of Pablo's finest, Moses woke up and we were able to negotiate the ship's price, which, at $400,00 dollars, I thought was high, just like he was.

(CMR) A drug trafficking memoir appears to make mention of a sitting cabinet minister in a newly released book. With strong Caymanian connections, this kingpin set up a Tampa-based smuggling ring that smuggled record amounts of Colombian marijuana through Panama.

Known for hobnobbing with celebrities and smugglers alike he now tells his own fascinating account of his life. He was considered a key witness that took down one of Panama's leaders, General Manuel Noriega.

Leigh Bruce Ritch, the grandson of Captain Theophilus Ritch from Cayman Brac, has written a book on the drug trade entitled In Too Deep: How an American Teen Became a Pioneer Boss of the International Drug Trade which chronicles his life as a youngster in Tampa and involvement in the marijuana drug trade among other things.

His Cayman connections run deep even today as it was revealed he has a close family connection to another sitting Cabinet Minister. As is customary in Cayman, discussions are now being had on social media as to how many individuals and businesses may have directly benefited from Ritch and his drug money.

He was convicted of narcotics trafficking in 1986 when he was said to be running of the biggest marijuana smuggling operations ever uncovered in the United States. By the age of 30, he was said to be doing transactions worth millions of dollars.

He had dual citizenship and had lived and worked in Cayman. He is said to have also had a substantial home in North West Point in West Bay.

He famously testified to the US Senate at the Kerry Committee Hearings.

He also makes an interesting reference to is friend Moses who assisted him with the purchase of a ship for $400,000 with no questions asked. He makes mention of a “Moses” connected to Kirkconnell Shipping that assisted him in his acquisition to be able to move the drugs.

The fascinating read is making the rounds in Cayman today with many having their interest peaked by the stories it contains including his connection to General Manuel Antonio Noriega, Panama and Ritch's eventual imprisonment.

Ritch, convicted of drug trafficking in 1986, testified at his trial that he regularly moved hundreds of thousands of dollars in drug profits to the Cayman Islands with ease. He now shares the details in this newly penned book firsthand.

He was sentenced to 30-years without parole for his part in the drug-smuggling and money laundering ring. His head of field operations Steven Michael Kalish was sentenced to 14-years and was given a better deal because of the key role he played in getting an indictment for Panamian President Noriega. Kalish was responsible for dealing with the Panamanian connections to launder the money.

Noriega, who was chief of the Panamanian Defense Forces, and business associate Enrique Pretelt were indicted in February 1988 by a grand jury in Tampa for allegedly taking $4 million in payoffs from Kalish and Ritch to protect their operation.

Noriega also was charged with laundering more than $100 million of the ring’s profits, partly through a corporation he controlled. 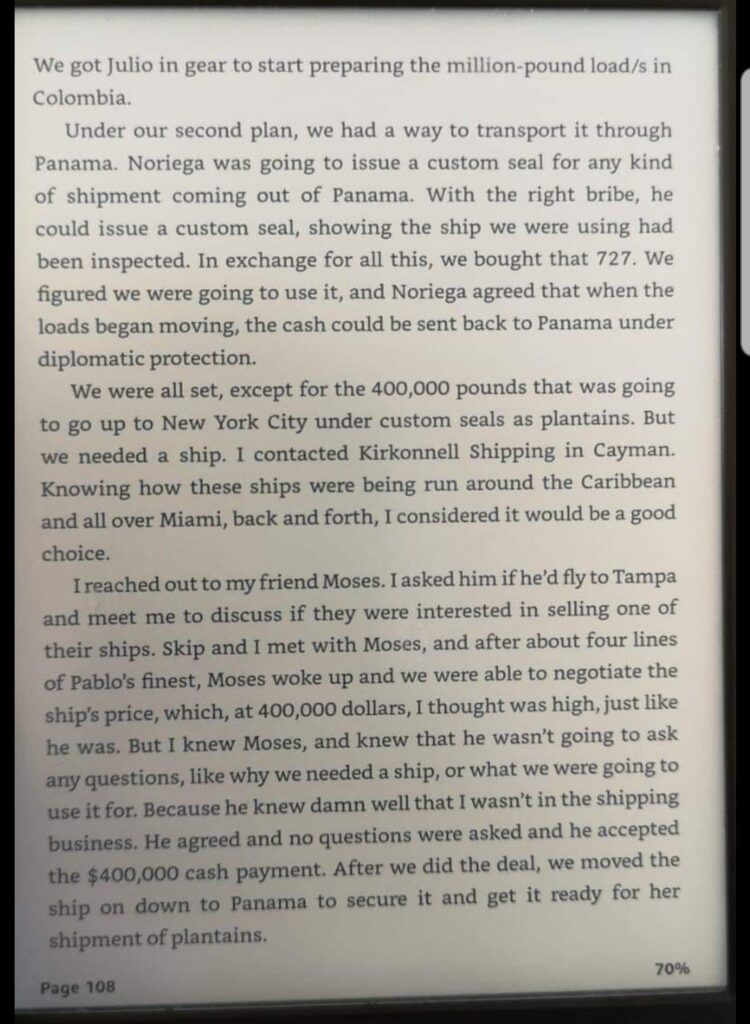 Ritch claimed he stuffed the money into suitcases and took it to the Caymans, where local banks charged a 1 percent fee for ”counting the cash,” a euphemism for laundering. The banks then shipped the money to the U.S. Federal Reserve system, he said.

Being described by the Detroit Free Press as the Billionaire Boys and also covered in several others books including the Sea of Greed and the Last Gentleman Smuggler; it is said that this drug bust not only affected the fate of two nations (Panama and the U.S.) but was also the catalyst for the War on Drugs campaign.

Ritch is said to be sick with cancer and has been undergoing treatment for 15 years. Watch his testimony at about 40 minutes into this:

No, thanks.
How do you feel after reading this?
Tags: drug smugglingLeigh Bruce RitchMoses Kirkconnell