Its a non-payment of import duty issue by the local agent for UPS. So we don't treat them any differently than we would treat any other customer. If you don't pay your import duty we won't release your goods. And we can't release the goods directly to their customers because they have contractual arrangements with their customers and there would be legal implications were we to insert CBC in the middle of those contractual arrangements.

(CMR) There was official confirmation today that payment issues are causing UPS goods to be delayed and it was not the fault of any government agency.

The Cayman Islands Customs and Border Control (CBC) agency issued a community notice informing the public that anyone experiencing delays receiving goods from UPS should contact the local agent and the reason for the delay was related to payment.

Apparently persons have informed CBC that they are being told that the reason for delays was because of CBC. However, CBC has now clarified the position in a Facebook social media community bulletin post. 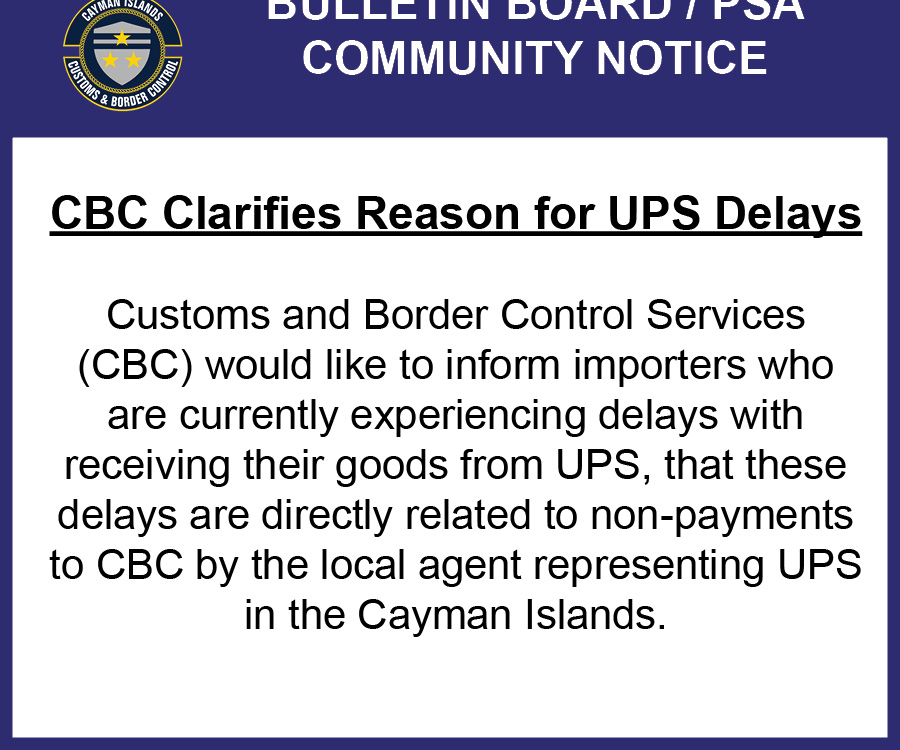 CMR sources indicate that given the record-breaking number of imports some companies are blaming their inefficiencies on the CBC; formerly customs who are responsible for collecting duty and allowing the good into the island.

Sprint is the local broker for UPS after NCI Services Ltd. announced in August 2019 that they would no longer be acting as the agent. An NCI email sent to customers at the time shared that they were agents for only eight months after entering into an agreement with Courier Ventures Ltd. That company is the service contractor for the UPS operations in Cayman.

With this agreement, we were tasked to facilitate the service of processing of inbound freight shipments by way of brokerage and delivery of the UPS shipments. This move was intended to be the initial step that preceded an agreement that would have had NCI Services Ltd assume full operations and responsibility of UPS’s Cayman operations by way of a purchase agreement with Courier Ventures Ltd. However, our negotiations were unsuccessful with UPS’s local service contractor Courier Ventures Ltd.

They ceased processing UPS packages and Sprint took over the contract. One well-placed source shared that Sprint was having no issue clearing items but it appears there was an issue with them continuing to do so on behalf of UPS. It was shared that:

“Sprint has been covering UPS costs for learning but they appear to be unable to recover payments from them so they have been waiting on funds before paying.”

Customers continue to express their frustrations of being caught in the middle of this courier mess.

Sprint has shared that:

The management and staff of Sprint Services would like to take the opportunity to address recent statements on social media regarding the customs clearances of local express courier service providers. Sprint Services is not financially responsible for the debts and charges incurred with Customs and the Cayman Islands Government in the course of providing these services as the third parties are directly responsible for these payments.

Sprint Services is the premier provider of customs clearance and logistics services and acts on behalf of third parties to provide these services. Customers of third party courier and express cargo companies should direct all inquiries directly to these vendors.

No, thanks.
How do you feel after reading this?
Tags: Cayman Border ControlSprint CaymanUPS Cayman