Family divided on what really happened

UPDATE: Both the hotel's manager and the mother-in-law of the injured young man have confirmed that the man's injuries are non-life-threatening and not the result of a stabbing. Instead, family to the couple has shared that his injuries were the result of a self-inflicted cut from a window received during an argument.

The parties were arguing at the hotel and it resulted in “him cutting his hand on the window glass.” It has also been shared that no one has been arrested at this time.

The police have confirmed that they attended the scene and it was reported to them that there was a family on staycation and an argument ensued between the husband and wife. The husband reported that he “struck a mirror breaking it which resulted in a hand injury. No reports of an assault and no arrests were made.”

Both parties posted on their social media accounts photos and videos making it clear they were fine and there was no need for concern about what transpired.

The couple joked about the seriousness of his injuries in another photo shared he was “critical”. However, the father of one of her children shared on Facebook that they were at the hospital until after 1:30 a.m. seeking care for the man who sustained an injury to his hand.

Despite her family and friends putting forward a certain narrative on social media his family is wondering why he has not made any direct contact with them to clarify what had transpired. They publicly shared their concerns on CMR's Instagram page. Around 3:30 p.m. they shared on Facebook:

“we have been calling, my aunt called, mum called everybody has been trying to get thru to him”

It is unclear why he has not contacted his own family but has reached out to CMR to set the record straight. He shared via DM that he injured himself and now all sorts of persons would be scrutinizing them. However, based on the numerous messages and reports that CMR has received public scrutiny would be nothing new for the couple. Some have indicated concerns about the welfare of the children and not particularly interested in what the adults are doing otherwise. 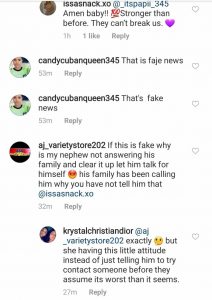 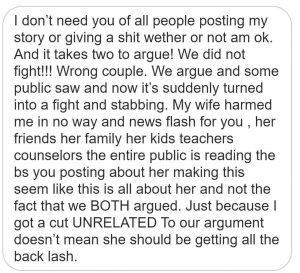 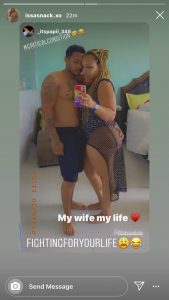 (CMR) A staycation at the Morritt's Resort in East End turned violent tonight after it is alleged that a mother of seven had a physical altercation her newlywed husband leaving him serious condition.

The couple was enjoying a family vacation at the resort after getting married end of March during the COVID shutdown. At some point, the staycation turned violent and the man sustained injuries said to be caused by stabbing at the hands of his wife. The initial argument took place “up the street” from the resort that they are staying at. In fact, one source said things were getting heated last night after the couple was seen at an East End restaurant. This may have spilled over into the day with excess drinking involved.

Sources indicate the children were present at the time of the incident and the couple has a baby together that is about 10 months old. Additional sources shared the family had sold most of their belongings and was planning to move to England at the end of the month.

CMR has been reliably informed her mother is from the Brac and father from West Bay. The husband is said to be a Spanish man. The police are investigating and any eyewitnesses are encouraged to speak with them.

This is a developing story and CMR will update here once more information is available.

No, thanks.
How do you feel after reading this?
Tags: Morritt's Resort Cayman