Florida breaks its own COVID-19 record day after it's set

(CMR) Florida has had several record-breaking days for new coronavirus infections over the past 48 hours breaking its own record earlier today. Florida's Department of Health made the announcement of this new daily record and confirmed that it surpassed the previous reported on Thursday record by 204.

On Friday, June 12, 1,902 new cases of COVID-19 were reported, according to state data. That number is now the highest single-day jump in new cases since tracking began in March.

On Thursday, 1,698 new cases were reported from the day prior, which was the highest single-day spike before Friday's numbers were released.  Twenty-nine new deaths were also confirmed.

The jumps in new cases come as the state continues the process of reopening businesses while also expanding testing for COVID-19. However, it is believed that the disease is spreading quicker. 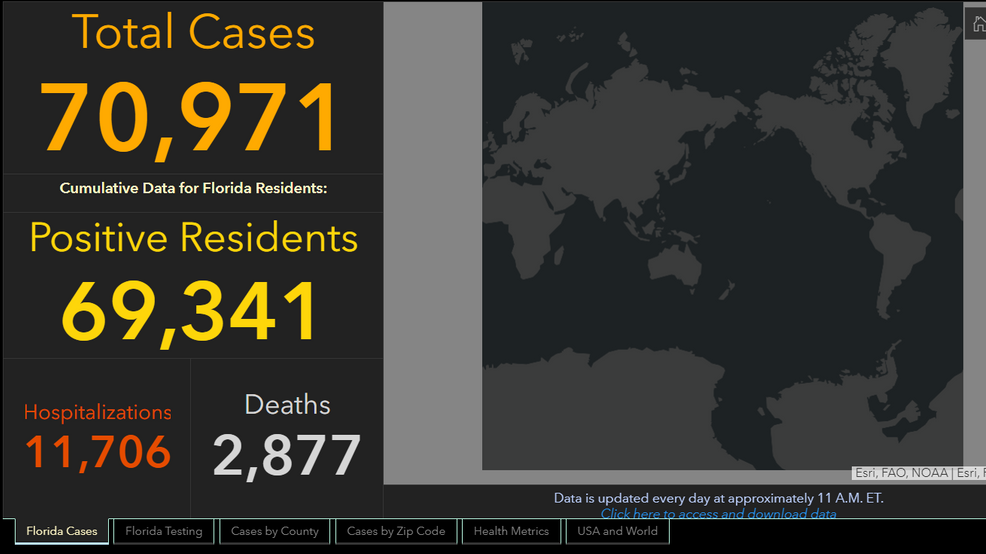 And as bars, gyms, vacation rentals and movie theaters reopened at partial capacity last week in all but three South Florida counties, the number and rate of new COVID-19 cases were rising statewide — a troubling indicator that the disease could be spreading more quickly.

More than half of the state’s known COVID-19 cases are in South Florida’s four counties: Miami-Dade, Broward, Palm Beach and Monroe. Miami-Dade continues to lead the state with the most confirmed cases and deaths. It has 20,872 known cases and 809 deaths.

Health experts nationwide continue to stress that now is not the time to relax health and safety practices and guidance from the Centers for Disease Control and Prevention, even as many states reopen for business and travel.
The United States surpassed 2 million COVID-19 cases earlier this week.

No, thanks.
How do you feel after reading this?
Tags: Florida