(CMR) Two police officers in Buffalo, New York have been suspended Thursday without pay after they pushed a 75-year-old man which led to him being seriously injured. Police had initially claimed that the man tripped and fell but later issued a correction when an eyewitness video went viral.

The elderly protester was part of a group demonstrating in Niagara Square against racial injustices after the killing of George Floyd in Minneapolis police custody.

After being pushed he can be seen falling backward and hitting his head and immediately began bleeding from his ear according to eyewitness comments on the video.

One officer can be seen about to assist him when he was pulled away by another police officer and they walked away. The Buffalo Police Department spokesman Mike DeGeorge told USA media today that the two officers have been suspended. 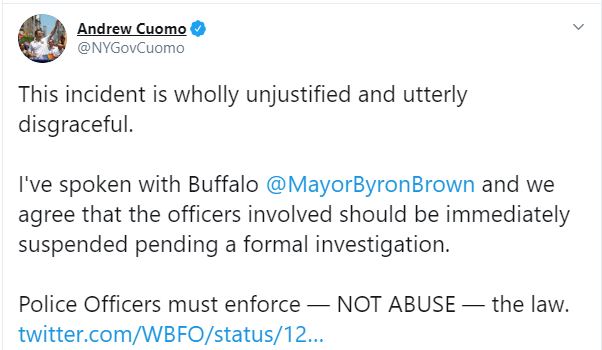 No, thanks.
How do you feel after reading this?
Tags: Black Lives MatterBuffalo Police Department