UPDATE: We are now able to confirm the below details. A Cayman Airways repatriation flight (KX3600) will be leaving for Kingston, Jamaica on Thursday, June 4 at 1:00 pm. The flight (KX3601) will be returning later in the afternoon at 4:05 pm. The plane will be manned by Cayman Airways crew members. There is no indication of whether or not they will be subjected to quarantining afterward.

No one will be permitted to sit in the middle and no service throughout the flight. Crew members are only there in the event of an emergency pursuant to FAA regulations. 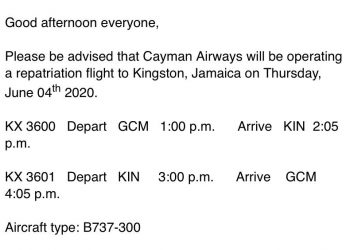 The Jamaican Honorary Consulate and the Governor’s Office have announced that the first repatriation flight to Jamaica has been authorized by the Jamaican Government.

The return leg will carry a small number of Caymanians seeking to return home, all of whom will be subject to 14 days of government quarantine. Those cleared to return will be contacted; please do not call the Travel Helpline.

Only those persons authorized by the Jamaican Honorary Consulate after registering on the JamCOVID website https://jamcovid19.moh.gov.jm/ will be eligible to return to Jamaica.

Travelers wishing to travel on subsequent flights are encouraged to register on the website now. The public is requested to refrain from calling the Governor’s Office for details of the flight but should call the Jamaican Honorary Consul with any queries.

(CMR) Exclusive information has just reached Cayman Marl Road that there will be a Thursday flight to Jamaica that is expected to carry around 75 persons back into Kingston. There are no available flight details as yet but it is expected that information will be firmed up later in the week.

There has been no official confirmation of the details of this flight. However, our sources also indicate that some Caymanians will be able to return on the flight as well; subject to the usual quarantining requirements.

No, thanks.
How do you feel after reading this?
Tags: repatriation flights