This company is a Bermuda holding company within the Digicel Group that provides mobile phone, cable television, Internet, and other communications services in the Caribbean and South Pacific. The filed for Chapter 15 recognition of it's Bermuda provisional liquidation at a bankruptcy court in Manhattan. 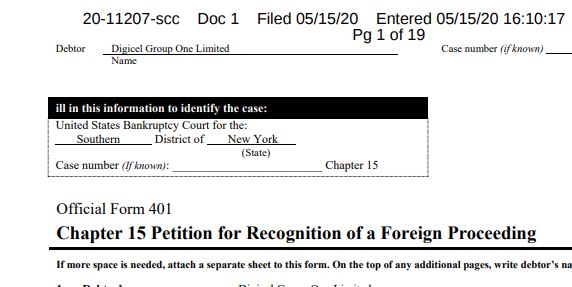 The regional telecommunications giant has indicated that this will allow them to restructure but insists its day-to-day operations will not be affected by the filing. They will also now appoint three provisional liquidators from KPMG, the global services company.

CMR received word last week that several persons were let go from the local company and several days ago it was announced that the company implemented a group-wide salary reduction, the move is being seen as part of Digicel’s attempt to restructure US$1.6 billion of its estimated US$7 billion debt.

Digicel's financial concerns were highlighted in early January when it was discussed that they might be struggling to refinance their debt. The Jamaica-based telecommunications company offered its Pacific business just last week as security to creditors in a debt restructuring according to U.Sl Securities and Exchange Commission filing. The SEC filings showed Digicel Pacific as a guarantor for $941 million in new secured notes maturing in 2024.

No, thanks.
How do you feel after reading this?
Tags: Denis O'BrienDigicel

JCPenney files for bankruptcy with hundreds of stores being closed