Jackass of the Day: Is Trump the biggest coronavirus jackass? Top 5 reasons why he could be!

by CMR
in Jackass of the Day!
0
160
SHARES
Share on FacebookShare on TwitterShare on Whatsapp

(CMR) The Trump administration continues to come under immense criticism after the manufacturers of Lysol and Dettol had to issue warnings to people not to inject or drink disinfectants after President Trump suggested they would be beneficial in fighting off the coronavirus.

‘Under no circumstance should our disinfectant products be administered into the human body (through injection, ingestion or any other route),' As with all products, our disinfectant and hygiene products should only be used as intended and in line with usage guidelines.'

Trump has been hosting daily White House coronavirus briefings that have proved his level of understanding regarding the coronavirus and outbreak around the world is not only misinformed but downright dangerous to the lives of persons willing to take his advice. 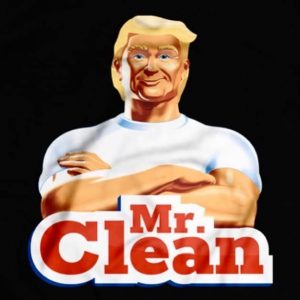 The latest backlash comes after Trump shared that researchers should try to apply their findings to coronavirus patients by inserting light or disinfectant into their bodies.

‘Is there a way we can do something like that by injection, inside, or almost a cleaning?' he said. ‘It would be interesting to check that.'

This is not the first time that Trump has provided incorrect information to the American people. CMR now takes a look at the top 10:

The makers of Lysol and Dettol have urged people not to inject or drink disinfectants to treat coronavirus after President Donald Trump suggested researchers check if it can be used as a treatment.

It was challenging to select only 5 things that Trump has gotten completely wrong with the coronavirus outbreak as almost daily he says something medically wrong and erroneous. However, we had to narrow it down or you'd be reading for days!

Claim 1: March 25 – America has done more testing than anyone else

“The United States has done far more ‘testing' than any other nation, by far!”

This statement is completely false. South Korea has lead the way in testing with some 357,896 persons at the time of this statement. Perhaps Trump got confused because the USA has tested 418,810 perhaps at the time. However, Trump forgot to deploy simple math to figure out the percentage of persons tested and not just the raw overall numbers.

South Korea has a population of some 51 million persons compared to the US 328 million. So in actuality, the US had only tested one in 780 people compared to South Korea's one in every 150 people.

Claim 2: Injecting with disinfectant can cure this virus 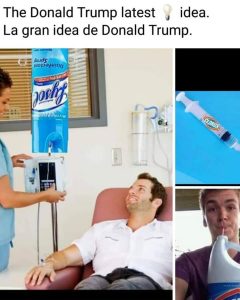 “I see the disinfectant, where it knocks it out in one minute. And is there a way we can do something like that by injection inside or almost a cleaning, because you see it gets in the lungs and it does a tremendous number on the lungs.”

This one appears to be the most outrageous statement to date. Disinfects can kill viruses on surfaces but has no bearing on what a virus does once inside a body. Under no circumstances should anyone inject or inject themselves with disinfectant.

Not only does consuming or injecting disinfectant risk poisoning and death, but it's also is not likely to be effective. After significant backlash and ridicule, he is now claiming that he was saying it sarcastically as some of his Cayman supporters claim he was just thinking out loud.

Claim 3: April 24 – Exposing yourself to sunlight will kill the virus

“I said supposing you brought the light inside the body, which you can do either through the skin or in some other way. And I think you said you're going to test that too… So, we'll see, but the whole concept of the light, the way it kills it in one minute – that's pretty powerful.”

Trump has also floated the idea of exposing patients to “ultraviolet or just very powerful light”.

There is some evidence that, in general, viruses on surfaces die more quickly when exposed directly to sunlight. But we don't know how much or how long they have to be exposed for UV light to have an effect. And again, this is only about infected objects and surfaces – not about what happens once the virus is inside your body.

It has long been known that ultraviolet light has a sterilizing effect because the radiation damages the virus's genetic material and its ability to replicate.

But coronavirus has also proven lethal in warm-weather places such as Singapore, Malaysia, and Thailand, raising broader questions about the impact of environmental factors.

Dr. Margaret Harris from the World Health Organization said: “the evidence is not supporting [the sunlight] theory”.

“I'm sorry but we cannot hope that summer is going to have the effect that many people hope it will,” said Harris. 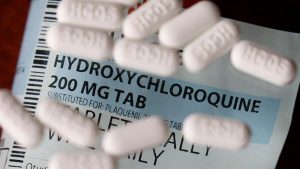 At Thursday's briefing, Trump issued a false denial when asked why he has stopped his promotion of hydroxychloroquine, an anti-malaria drug that he embraces as a potential cure for coronavirus.

However, despite now denying it in the past week Trump has back away from stating that hydroxychloroquine is a miracle drug for people suffering from complications of COVID-19 disease. In March and April the President could be heard making mention of hydroxychloroquine almost daily and dozens of times during the White House press briefings.

He incorrectly implied it was safe to treat Covid-19, encouraged Americans to “try it” and said it might be the biggest breakthrough in modern medicine.
“What do you have to lose?” he asked during a briefing in April. At one point he even threatened India to supply the American with their supply of the drug or else.
New research from Brazil, France and veterans' hospitals in the US indicate that the drug might not help patients with the coronavirus, and might even have deadly side effects.

Last week Trump pulled funding from the World Health Organization (WHO) claiming that they were to blame for the spread of the virus in the United States. In fact, he appears to claim that he had no knowledge of the virus and the impending severity of what was to come.

However, from early January there have been numerous warnings from both the Centers for Disease Control and Prevention (CDC) and WHO. By January 18 he had received a briefing from the health secretary, Alex Azar. In fact, he called Trump at his Mar-a-Lago resort in Florida and briefed him on the coronavirus threat, but “Trump spent much of the conversation wanting to talk about vaping”, the AP reported.

Several days later on January 21 the first American who had traveled to China was hospitalized in Everett, Washington near Seattle and tested positive for COVID-19. The following day Trump claims that the Americans had it under control whilst attending the Davos conference in Switzerland.

We have it totally under control,” he tells the US cable channel CNBC.

“It’s one person coming in from China, and we have it under control. It’s going to be just fine.”

There are but a small sampling of some of the many missteps from President Trump and misinformation that has provided the American people. Now the US has the highest incidence of COVID-19 infections with over 948,079 total cases and over 53,471 dead. The United Staes leads the world in total infections and COVID-19 deaths.

As Cayman's closest North American neighbor that directly impacts our food supply chain and even tourism numbers, it's very concerning the approach the President has taken to providing inaccurate information. This will almost guarantee that our borders remain close for a much longer period of time with some projecting mid-2021 before they can safely re-open.

No, thanks.
How do you feel after reading this?
Tags: covid-19President Donald Trump

(CMR) Reed Parker has been identified as the stapler thief featured earlier today in an article for stealing a stapler on Monday at...