by CMR
in Breaking News
0
1.3k
SHARES
Share on FacebookShare on TwitterShare on Whatsapp

(CMR) Minister Dwayne Seymour was literally brought to tears today after he shared he was contemplating not attending today's press conference because of disparaging remarks made on Cayman News Service (CNS) about him. He said that something was “resting heavily on his heart” and he was not sure if he would have even attended today because of it.

Cracking under the pressure of the negativity, Seymour was calling on the police to come down heavily on “media bloggers” he went on to mention CNS by name indicating they should be held responsible for the comments on their platform and arrested. He accused CNS of not being responsible and trying to derail the progress of the government.

Apparently, he claims they also refused to print someone's response to the comments in his defense.

His comments were brief as he became too emotional to carry on but ended that people were seeking to find ugliness instead of unity.

A firestorm immediately erupted that caused the CNS website to crash under the pressure of numerous persons attempting to access the site.

Whilst he did not specifically indicate what the matter concerned some have speculated that it was a story related to the government's recommendations on the wearing of face masks. However, there have been numerous stories posted about the government with disparaging remarks of the minister. One person speculated that the following comment may have been the trigger for the outburst: 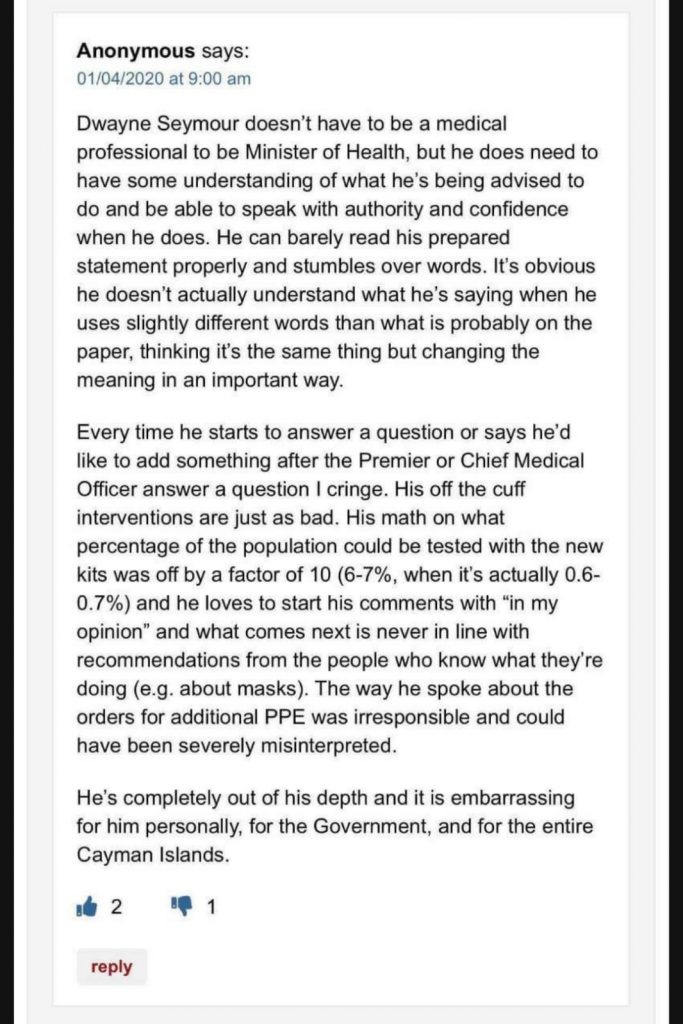 Within minutes of the Minister's live comments, the CNS website crashed under the pressure of numerous persons attempting to access the site to figure out what story or comments brought him to tears.

For their part, Cayman News Service indicates they are unaware of what he was speaking about as he did not contact them to complain about any comments. Furthermore, they have shared that they do not block comments unless they are against their commenting policy or the law. So a comment would not have been restricted simply because it was favorable to the Minister. They wished to make it clear they do not engage in that sort of censorship. They shared:

“CNS would never decline to post a comment simply because it is in support of a particular individual. If any comment was deleted, this would have been for some other reason. We have no idea why the minister claims a comment in support of him was not posted and we have no idea which comments the minister is upset about as he has not contacted us.”

Ironically during the live press conference Wendy Ledger did not directly question or respond to the incident.

No, thanks.
How do you feel after reading this?
Tags: Cayman News ServiceDwayne Seymour