(CMR) A British couple who were removed from a beach in Brighton, slammed police for ruining their day. The couple were on Saturday April 4, caught having a barbeque on the beach, disregarding the UK’s lockdown rules aimed at curtailing the spread of the coronavirus.

Footage of the ordeal was widely shared on social media platforms. The 36-second-long video shows officers approaching the couple who were seen seated on the sand around a bag which contained goodies. 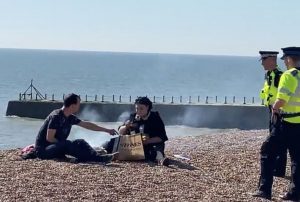 The police are heard telling the pair, “You need to take your alcohol or we'll move it swiftly away from you.”

The woman seen in the video, responds, “You’ve just ruined our fricking day!”

According to the Sussex police, despite repeated requests for the couple to leave, they allegedly refused to do so. The police further revealed that the male, was initially arrested. However, it is understood that after he went into a coughing fit, he was released and sent home to self-isolate.

The couple, a 31-year-old man and a 48-year-old woman, both from Hove, will appear before the court, though a time has not yet been scheduled.

No, thanks.
How do you feel after reading this?
Tags: British CouplecoronavirusSussex police

(CMR) Indonesia's parliament has banned sex outside marriage with a punishment of up to one year in jail, a law...