(CMR) There is growing concern that the Chinese government underreported the total number of COVID-19 infections and deaths. According to some sources, it could be a substantial number by the thousands. Official Chinese sources claim that over 82,000 persons have contracted the disease and some 3,300 plus deaths with the vast majority being in Hubei Province.

However, some persons speculate the actual death toll could be over 40,000 by some estimates. There are concerns that other countries including Russian and North Korea have also likely underreporting their numbers as well. In fact, North Korea has reported no cases to date.

Now, a new classified report compiled by the U.S. intelligence community appears to confirm that China is likely been less than truthful with its figures. Bloomberg which first reported on the shocking revelation confirmed the existence of the report through three U.S. officials who were not named. According to the unnamed officials, the report states that the numbers were intentionally concealed by the Chinese officials.

The reports' findings mirror what some civilians, who live in the epicenter of the coronavirus outbreak,  had been suggesting all this time. Several Wuhan residents had raised the flag of suspicion about the Chinese government's figures based on the volume of cremations being conducted daily; with one report stating that over 500 cremations were performed daily.

However, President Donald Trump, has denied the existence of the damming report. At a White House press briefing on Wednesday, Trump said that his team had not received any intelligence to suggest that China underreported its numbers, as it relates to the deadly coronavirus. Nonetheless, the American President went on to add that Beijing’s- China’s capital city – “tally appeared to be a little bit on the light side.”  “I’m being nice when I say that, relative to what we witnessed and what was reported,” added Trump. 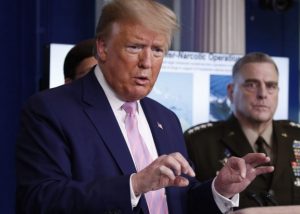 Trump’s vice president, Mike Pence, seems to also support the claim that the figures provided by the Chinese authorities on the coronavirus may not have been accurate. Pence told CNN on Wednesday the United States and the world could have been better off if China had been more forthcoming.

“What appears evident now is that long before the world learned in December that China was dealing with this, and maybe as much as a month earlier than that, that the outbreak was real in China,”

Senator Ben Sasse, a Nebraska Republican, said in a statement after Bloomberg News published its report.

“Without commenting on any classified information, this much is painfully obvious: The Chinese Communist Party has lied, is lying, and will continue to lie about coronavirus to protect the regime.”

No, thanks.
How do you feel after reading this?
Tags: ChinacoronavirusDonald TrumpMike Pence

Foster's denies rumours that some employees tested positive for COVID-19