(CMR) The owner of Tortuga Liquors, Robert Hamaty, has expressed his disappointment in Kasnique Patrice Austin Cupid after she was arrested earlier today in relation to a February robbery at his Governor's Square Tortuga store.

The letter sent to Tortuga employees states that he was disappointed to hear that “the enemy was within our operation” sharing that as a family company they always try to support their employees.

He confirms the allegations in the CMR article published earlier this evening by sharing a video of her arrest and indicating she is the “criminal” in the video responsible for a part in the robbery that injured some of his employees. In fact, he states that she organized it and he was disappointed in people that “bite the hand that feeds them.”

He goes on to warn staff that they have the best security systems in place and there's a whistleblower award that is offered to anyone with information that leads to the arrest of thieves in the organization. 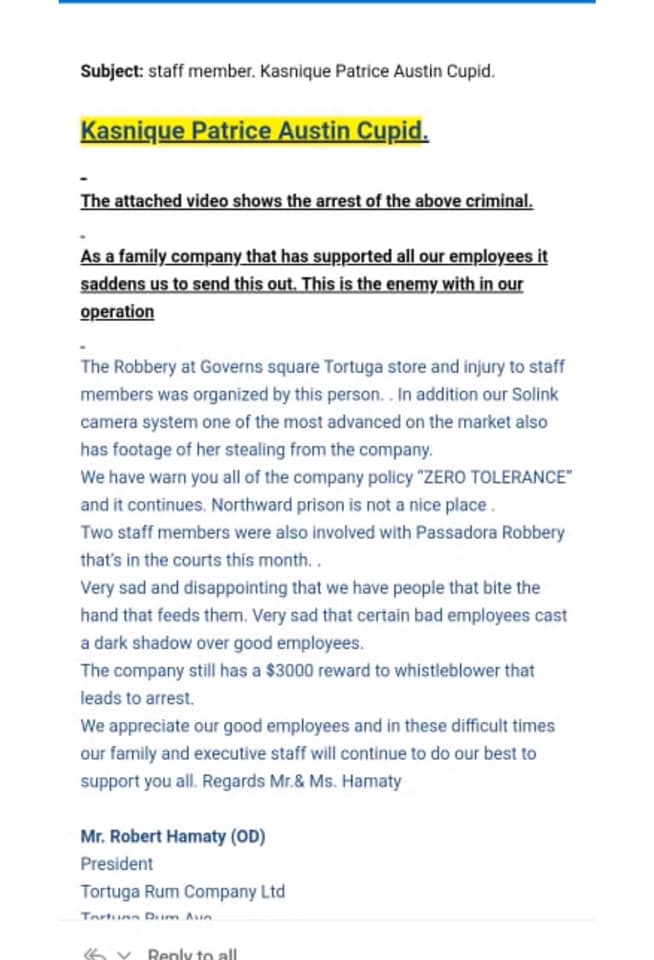 In an amazing turn of events, Cupid took to CMR's social media page to proclaim her innocence and claim that she was arrested for an outstanding traffic ticket. However, a keen observer was quick to point out that the receipt she provided as evidence was a receipt with from Monday, March 16 and not today.

Cupid continues to deny any involvement in the robbery and claims that people are lying on her for spite and that once again her celebrity status has been accelerated to another level and describes it as “beyond my imagination”.

She also threatened to “go live” to address the comments about her arrest. The entire saga, despite being quite serious, has provided some comic relief for many in the Cayman Islands after a rough week dealing with COVID-19 related news.

No, thanks.
How do you feel after reading this?
Tags: Kasnique Patrice Austin Cupid