CMR has received the following from multiple sources today and attempted to confirm it from one of our reliable well-placed sources who has confirmed the authenticity of it.

The government has confirmed the following:

Hon. Alden McLaughlin announces that following a meeting of Cabinet key decisions have been made:

1. A number of countries have been added to the travel restriction list.
2. No cruise lines visits will occur starting on Monday, March 16th for a period of 60 days
3. All schools will close on Monday, March 16th until April 27th
4. Ban on all public gatherings of over 50 persons until further notice with the exception of hospitals, pharmacies and supermarkets.

The Governor said he supports the decision announced by the Premier. He said the majority of us will likely only have mild symptoms if we get COVID-19 but our elderly and vulnerable need our support and assistance, so he encouraged people to help one another.

The press conference is currently underway and can be watched on CIGTV Youtube Channel.

Many private schools were already taking proactive steps to close in any event.

Sources indicate the official statement will come later this afternoon. 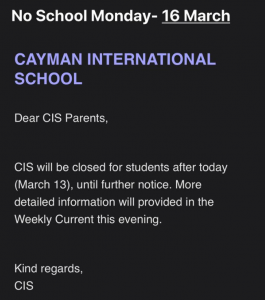 Parents are encouraged to communicate directly with their school managers.

No, thanks.
How do you feel after reading this?
Tags: coronavirus