(CMR) The PPM lead Unity Government has had a tough week after Sunday's landfill fire ignited a firestorm of criticism. Today Premier Alden McLaughlin calling the situation “hell” and issued a public apology claiming the landfill remains a priority for his government. At a media press briefing this afternoon he shared:

“I want to say how sorry I am, and the entire government is, about yet another one of these massive landfill fires,”

The fire has been burning non-stop for the past three days after a Saturday afternoon smolder soon ignited into a massive blaze by late Sunday afternoon. Later that evening a mandatory evacuation was issued for Lakeside Apartments with multiple private and government schools having to shut down completely. Emergency shelters including the Cayman Islands Red Cross and the John Gray High School opened late into Sunday evening for residents to have a safe place to spend the night.

Residences of the Watler Road residential area (“Dog City”) were also advised to evacuate their homes. The fire also impacted local businesses with several having to close on Monday including Kirk Market and several others in the Bay Town Plaza and surrounding areas.

Additionally, the closure of the Esterley Tibbetts Highway created massive island-wide traffic gridlocks in all districts heading into town; with West Bay Residents faring the worse. Monday morning commuters complained of having to spend several hours in traffic for what would normally be a 15-minute drive.

The community was up in arms about the potential health risks and years of continued fires at the landfill. One resident addressed his concerns publically in the Prospect/Red Bay Community WhatsApp Group chat directly to the Premier: 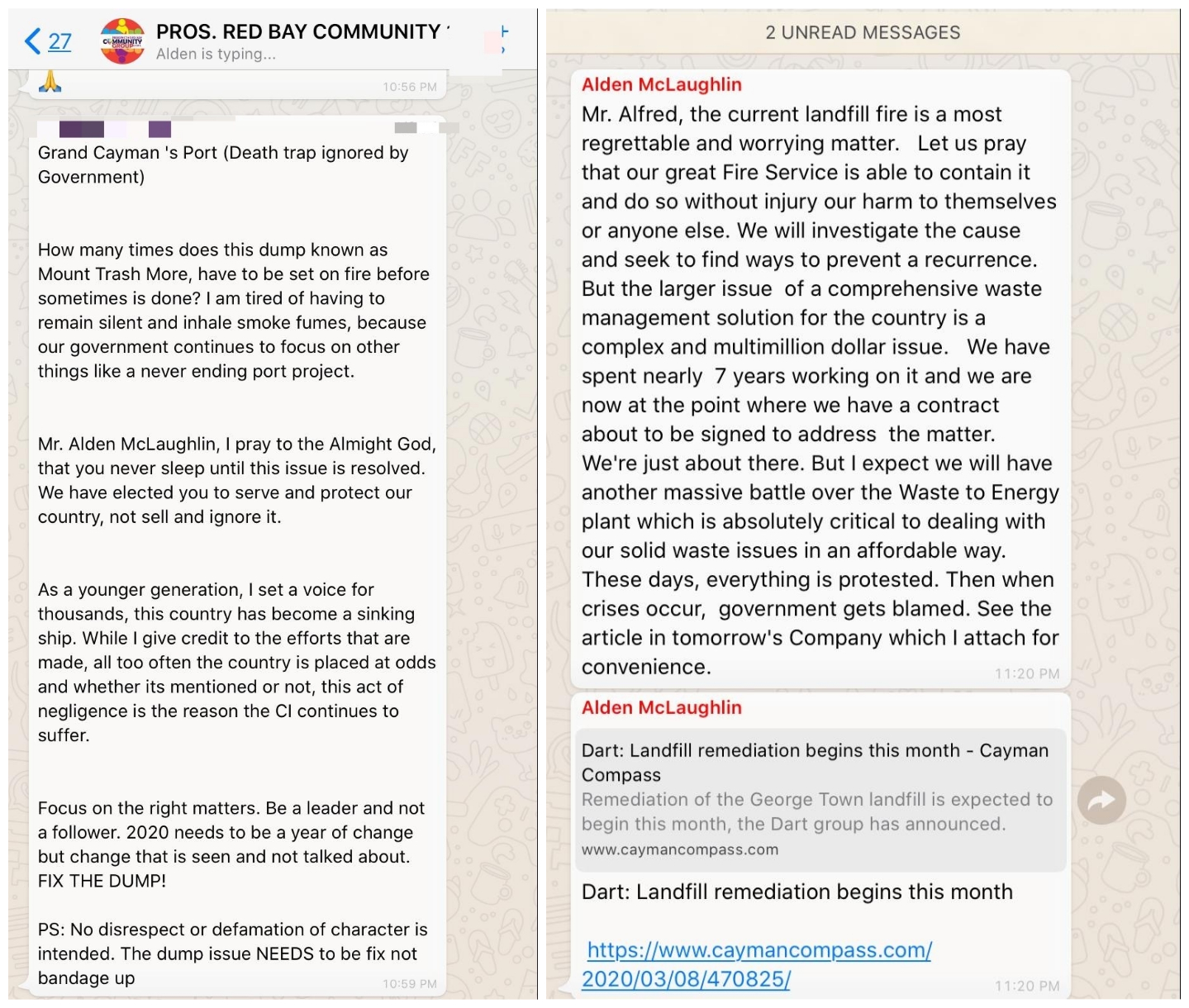 McLaughlin responded by reminding his constituent that he has given this country the “20 of the best years of my life.” 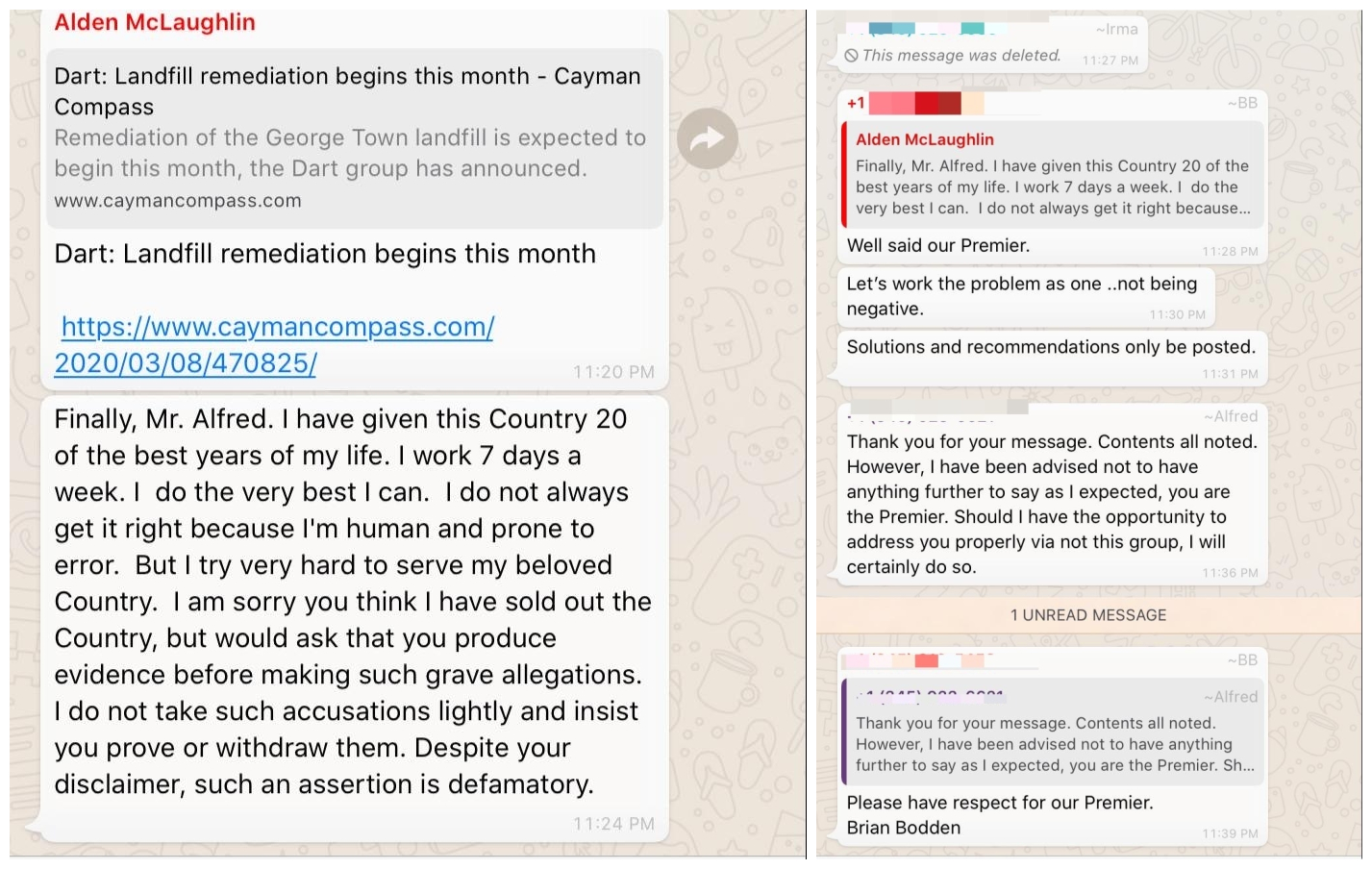 Despite him stating at today's press conference that he spent the evening at the landfill accessing the situation and being supportive of government fire officers and DEH employees, another social media poster shared his frustration with the Premier. He alleged that the Premier was actually at Suncoast Bar in Breakers as the fire burned:

Sources close to the situation have indicated that the fire cannot be completely outed as it is too deep into the ground. The excavation team is afraid if they dig further they may cause a bigger issue with an explosion or collapsing of the ground being real possibilities. They will attempt to allow it to burn out on its own at this point.
For the foreseeable future, the landfill can only accept soft garbage from home and restaurants but cannot accept construction material, steel, cars, bush, etc. as those areas were the hotspots for the fires. This may continue into an entire week with some residents having concerns about the environmental and health safety impact of those garbage stacks.
The composite area, tire stash, and the vehicle piles were all said to be engulfed in the fire. The fire also came extremely close to the roadway and concerns mounted late Sunday evening that the fire could have jumped across the highway into residential areas. High winds in excess of 20 mph compounded the situation and made the fire much more difficult to get under control.
The fire flared up slightly this morning around 10:30 am.

No, thanks.
How do you feel after reading this?
Tags: fire incidentlandfill