(CMR) Within one minute of posting the story of an alleged cellular phone thief, CMR was alerted as to the possible identification of the individual by one of our astute readers. After carrying out further checks we are able to now confirm that the person in the video has been identified as Jamaican national Shanana (Shawna) Smith. The story was posted at 8:24 pm and by 8:25 pm a tip was received indicating that the photo and video footage looked like “Shawna Everbless Smith” – her Facebook handle.

Smith works as a cashier at a local restaurant in East End and is a mother of two. Sources indicate she had only recently arrived back on the island after being re-hired into her job following an absence of about a year. Other sources shared that she may also go by the names Neisha.

Smith was captured on Tuesday afternoon taking two phones that were left in a discount store and placing them in her handbag before leaving the store. Despite having the business card of the owner of the phones she has not voluntarily returned them.

The phones have yet to be returned but persons are working diligently to ensure that they are by tomorrow. 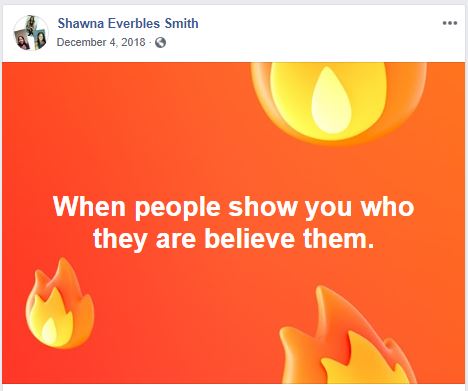 No, thanks.
How do you feel after reading this?
Tags: Shanana (Shawna) Smith