(CMR) The winner of the 2019 Pirate's Week Song Competition is still waiting on his $5,000 cash prize almost three months after the competition.  The event was hosted on Saturday, November 9 and sponsored jointly by the Pirates Week Festival Office, the Tourism Attraction Board, Ministry of Culture and the Cayman Music and Entertainers Association.

“The Matrixx” Mikhail Campbell took the first place price and should have received his $5,000 prize. However, exclusive CMR sources have indicated that prize money has not yet been received despite being given to the CMEA at the time of the competition for distribution.

Campbell was enthusiastic about participating in the event and even shared it his social media page: 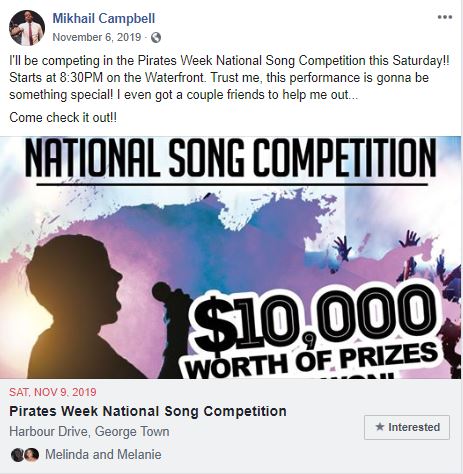 CMEA appears to be in turmoil over the past several months with it resulting most recently in a dispute over who is actually the president of the Music Association. The association announced that they elected a new executive board including a new president almost two weeks ago. Despite that revelation, Jean-Eric Smith (Notch) sent out a notice to the local media that he is still the president of the association and that an AGM isn't scheduled until March 1, 2020. 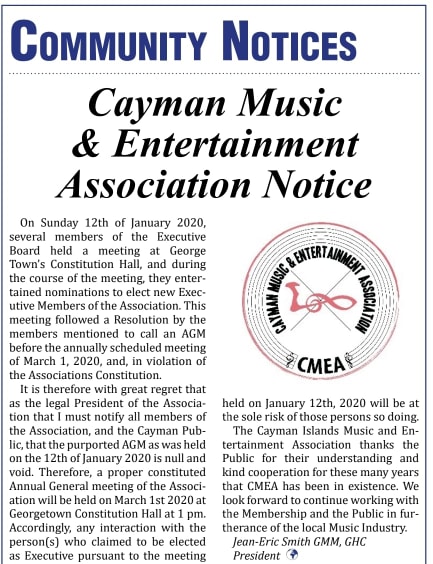 CMR initially understood that many were unhappy with the CMEA at the end of November as a shakeup appeared imminent at that time. Despite these internal issues there's appears to be no legitimate reason why a third party competition winner would not have received his funds all these months later.

The cash prizes for the Pirates Week National Song Competition amounts to CI$10,000; the Ministry of Culture, the Tourism Attraction Board (TAB) and the Cayman Music and Entertainment Association (CMEA) sponsors the $5,000 first, $3,000 second and $2,000 third prizes, respectively.

No, thanks.
How do you feel after reading this?
Tags: Pirates WeekThe Cayman Music & Entertainment Association

BREAKING: Woman stabbed in the stomach in West Bay