Street vendors to be a thing of the past

(CMR) Morning commuters will no longer be able to purchase the Cayman Compass starting next week as media in Cayman continues to transform at a rapid rate.

CMR sources have indicated that the long standing practice will be coming to an end. It was originally started in the aftermath of Hurricane Ivan in 2004 when the paper’s print schedule was interrupted and papers were being printed in Jamaica and only available several times per week. At the time Compass owner, Brian Uzell, shared:

“Street vendors selling the newspaper are another innovation the Compass has commenced, leading to record-breaking sales and jobs for Caymanians.”

As the paper resumed its regular 5 day schedule and morning runs in March 2005 he indicated the street vendors were safe:

‘We’ll still use our street vendors with the new schedule, but they’ll be out during the morning rush hour.”

However, the practice was ceased and then reinstated in May 2011. At that time McKeeva Bush gave his full support of the initiative sharing that:

“Cayman Free Press is a long-established company in the Cayman Islands and the Caymanian Compass has become the newspaper of record over the years… The Compass does a good job of presenting the news accurately and fairly.”

He was also pleased that it was giving unemployed Caymanians a job.

The idea was to give readers the convenience of buying the day’s newspaper on their way to work without getting out of the car.

Agents would be by the roadside from 7:30 am to 9:00 am weekdays. The shifts were covered mostly by Caymanian women who only had the part-time job as income. We understand that under David Leggae’s management the vendors would give the Compass a percentage of sales. However, about one year before the paper was sold vendors were permitted to keep all money earned.

At the height of the scheme there were eight vendors around the island in high trafficked area of George Town, Seven Mile Beach and West Bay. On average, street vendors would receive about 75 papers per day and around 100-150 papers on Friday. However, declining sales saw them selling sometimes only half of their inventory.

Some weeks back a commenter shared with CMR that when they were approached about buy a paper they cheekily replied:

”I get all my news online from Cayman Marl Road.”

Recently the Compass increased the price of their paper while reducing the size. The new format change was said to come amid concerns of slumped sales. Some locations can be observed having a stack of leftover papers at the end of the day.

Many speculate that Legge sold the paper because media forecasters indicate that the days of print media are limited and will be even more severely impacted once WORC’s mandatory job portal is launched and employers no longer have to advertise in print media. 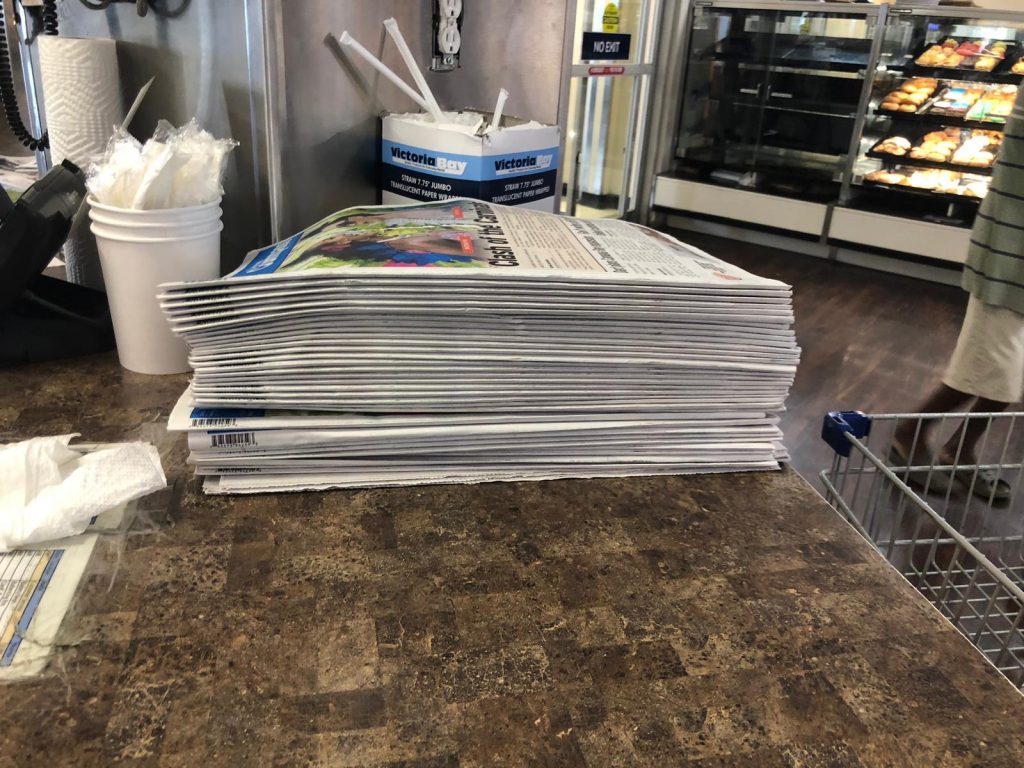 Prior to that, directors and Co-CEOs David and Vicki Legge served as owners for the previous six years. His tenure running the newspaper was a tempestuous time for the 46-year-old newspaper.

Many locals accused Legge of being woefully disconnected with the average Caymanian reader after a name change and numerous controversial editorials. At one point, Premier Alden McLaughlin ceased government advertising with the Compass. However, as their biggest advertiser, he soon caved to the pressures of business interests and resumed advertising with the controversial editor.

Compass’s new management has been keen to see how they can best meet the changing desire of newsreaders. Last year Cayman 27, the island’s only news television station, was shut down after years of not paying its regulatory fees. Government’s response was to partner with the Compass and CIGTV.

Some street vendors have been stationed at their posts for quite some time – upwards of 10+ years.