(CMR) Alleged fraudster John Felder and former CEO of Cayman Automotive Leasing & Sales Ltd. (CAL), was removed from the post in July 2019 according to exclusive sources due to “gross financial malpractice and serious ethical and legal improprieties.”

We understand that a new ownership group and management are now in place at CAL.

Well placed sources inform us that Felder has returned to his hometown of Maryland, USA but continues to do business in the Cayman Islands via EcayTrade advertisements.  Currently, Felder has 14 vehicles for sale:

Is it unusual as the vehicles are listed in KYD and the target market is Cayman. However, it appears these vehicles are not actually on the island. He is using his personal Gmail account for the adverts but people should exercise extreme caution when dealing with him. It is uncertain if Felder has a local trade and business license to be able to carry on business in this jurisdiction.

His LinkedIn account still has him listed as being at CAL in the Cayman Islands: 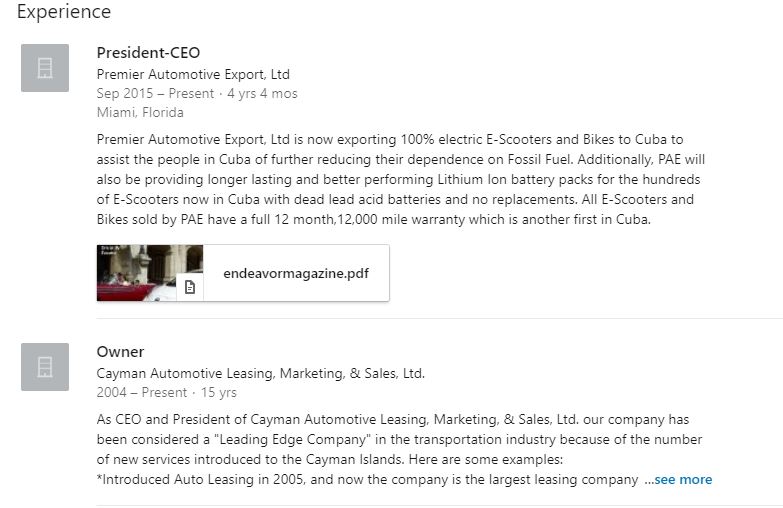 Cayman Marl Road previously reported that Felder was being sued by several persons for hundreds of thousands of dollars. In both cases he appeared to have used his position as CEO of Cayman Leasing to obtain these on behalf of the company. The Caymanian director and former partner, Randy Merren, was unaware until the revelation of the extent of Felder's actions.

Despite what could be called fraud, Felder has been permitted to leave the jurisdiction and operate out of the United States using Cayman classified resources to target local clients. We understand that Felder is a “first-rate con artist” that has left a slew of victims in his wake. One source shared:

“Felder has ripped off very prominent people in the community and they do not want their names revealed because it's embarrassing and shows a lack of good judgment in trusting this con man.”

Felder was very adept at making connections in the community and marketing himself via business organizations like Rotary Cayman.

We understand that he was applying for his Cayman residency.

Cayman Automotive is now under a new management team with new gas and electric vehicles available.

No, thanks.
How do you feel after reading this?
Tags: John Felder