(CMR) The Cayman Music & Entertainment Association (CMEA) has announced the cancellation of its third annual thanksgiving benefit concert among controversy that emerged on social media over the past few days. The event was to be held this Saturday 30th November, at the East End Heritage Field at 6:00 pm.

Allegations are that long-standing President Sean Eric Smith (Notch) acted without the knowledge or permission of the executive when deciding to select this year's beneficiaries, Renwick and Jolly Conolly. In fact, multiple committee members have indicated they had no knowledge of the event at all and the executive members were largely kept in the dark. Not only were committee members completely unaware of the planning of the event but numerous industry working being called upon to donate their time and equipment were allegedly misinformed.

Further, indications are that the event was being promoted on the radio and social media without the permission and knowledge of the Conolly family despite using their name on printed flyers, Radio Cayman and Breeze FM. There was even a radio interview on a local talk show promoting the event. 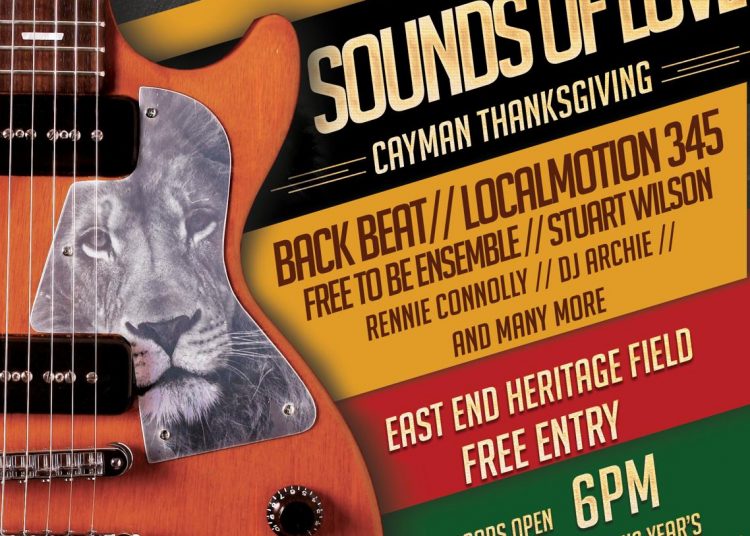 Exclusive CMR sources indicate people approached Renwick Conolly and he shared with them that he was unaware that his wife was the beneficiary of the event. One source shared that, Conolly, a local musician himself, appeared to be shocked when they mentioned it. Initially, they figured it could have been planned as a surprise benefit until they saw the beneficiary's names being used to promote the event. Conolly was also one of the musicians slated to perform at the event.

Jolly Conolly has a serious medical issue some years ago that has left her permanently disabled after a medical procedure. It appears that Conolly had to resort to social media in order to clarify his position.

After this post, several CMEA executives commented and indicated their position and obvious lack of knowledge of the fundraiser as well. 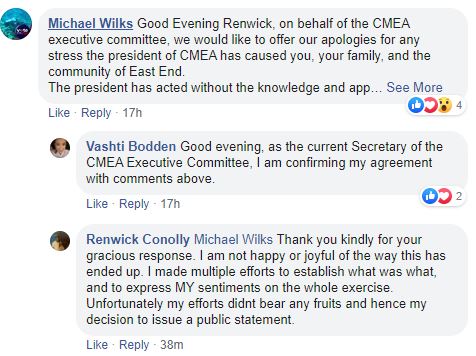 Further commentators indicate their shock and surprise at the revealing posts and congratulated Renwick for speaking out and setting the record straight.  Calling Renwick a man of integrity they appeared amazed at the manner in which the benefit concert was being handled and demanded that the association president “needs to explain this mess to the public”. 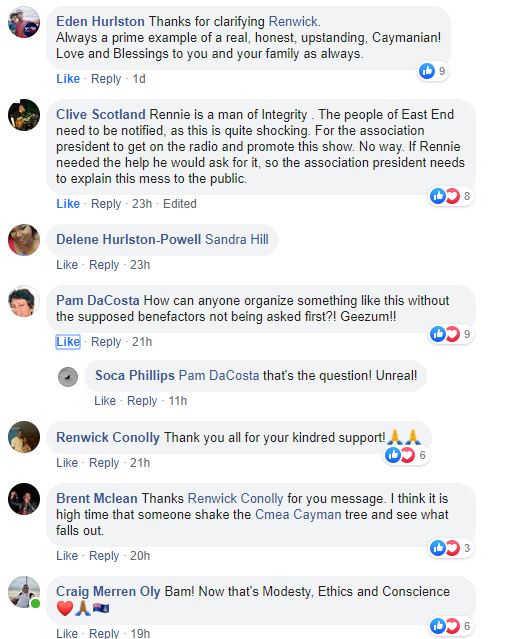 Instead of offering an explanation, the event has now been canceled. This morning, the CMEA has issued a statement indicating that the event is now canceled and thanked the various persons that have committed to assisting with the benefit concert. One such person who actually confirmed on Facebook that they providing the fireworks services was Graham Rankin. He shared that he was told that the event was to benefit the Conolly family.

The emailed statement gives no reason for the cancellation of the event and reads in part,

“To the Members and Friends of the CMEA, we thank you all for your ongoing support and look forward to seeing you all again at our next Benefit Concert, to be announced in the not too distant future.”

Rankin spoke exclusively to CMR and explained that he was told by Notch that the benefit concert was being put on some weeks ago and they wanted his assistance with fireworks. He indicated he was happy to provide his services pro bono because of who the reported beneficiaries were. Renwick and his family are from East End and are held in high regard but the community there and beyond.

Musicians were organized and the entire East End community was being informed of the scheduled fundraiser event. Sources shared that Conolly was not willing to accept assistance that he does not need at this time and in fact, he was specifically told by Notch that he was not the beneficiary of the fundraiser but was simply slated to perform at the event.

Shockingly, CMR has now learned that the press release was allegedly penned by the president alone and other executive members were not aware of it. Executive member Michael Wilks also commented on the Facebook post indicating this press release demonstrates a “no remorse for these actions” and confirms it “was not issued by the CMEA as a collective.” He further shares his apologies for the situation. 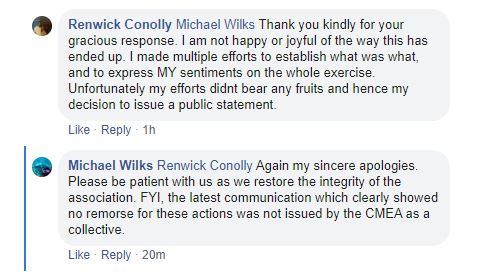 Persons familiar with the situation indicate that they are not surprised by “this latest rogue move by Notch.” In fact, they shared that for the past ten years during his presidency this has been “an ad-hoc association, highjacked by one man”. The source further notes:

“It is incredibly unbelievable that one person can attempt to run a non-profit organization as though it is their own personal company. There has been no accountability or professionalism during the time that Notch has been in charge of the organization. In fact, members are even confused about which constitution is currently valid. Rules are changed and made up on a whim.”

They further alleged that the financial standing of the organization should be audited by the Cayman Islands Government, its biggest financial donor. They suggest that the minister responsible for this needs to set aside any personal relationships he may have with persons involved and ask some tough questions. Stating:

“Funds are given from the Ministry of Culture each year with no accounts having been submitted and even accounts that are submitted are questionable at best and false at worse.”

The general consensus is the existing board that has been in place for about a year is now tired of the lack of accountability, respect, and superiority complex they allege is rampant. One person shared:

“Corruption is really rampant in our people no wonder we get taken for a ride.”

Interestingly enough, CMR has complaints about the CMEA dating back to January 2017 from some of the younger members of the association who felt that the organization was not representing their interests. At that time they shared:

“CMEA fails as a regulatory body”

CMR understands now that moves are being made to shake up the executive and remove Notch as president. We reached out for comment from Notch but none was forthcoming at the time of publication.

No, thanks.
How do you feel after reading this?
Tags: The Cayman Music & Entertainment Association