International manhunt on for fraudster 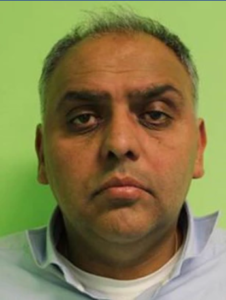 An Interpol Red Notice has been issued against a United Kingdom national who evidently fled Bermuda after being criminally charged with swindling “several million dollars” from investors in his offshore finance group, which includes companies in Bermuda, Cayman Islands, Channel Islands, Cyprus, England, Malta, Netherlands, and possibly the British Virgin Islands.

Ramesh Dusoruth, owner of St George’s Ltd, faces a charge of fraudulent inducement to deposit or invest and another of transferring criminal property. He is also charged with three counts of transmission of false information to the Bermuda Monetary Authority.

Mr Dusoruth was arrested and charged with the offences, but failed to appear in Magistrates’ Court on March 21 and an arrest warrant was issued.

He added Mr Dusoruth is known to have business interests in Cyprus, Malta and Holland and has homes in London and Antwerp in Belgium.

Interpol has been notified and the alleged fraudster has been red-flagged for arrest and return to Bermuda to face the charges in court. Anyone with information on Mr Dusoruth’s location should contact the police specialist investigations department on 295-0011.

CMR sources have indicated that they believe that Dusoruth could be in Cayman. 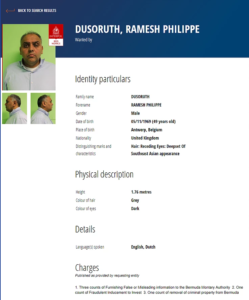 No, thanks.
How do you feel after reading this?
Tags: Bermuda Monetary AuthorityfraudInterpol Red NoticeRamesh Dusoruth