CMR ran a story earlier this morning giving the details of how Lawrence used a stolen credit card to acquire a Lenovo laptop last month from Office Supply in Marquee Plaza. They were offering a $500 reward for information leading to the successful identification of the suspect as they fully intend to press charges against him.

Less than half an hour after posting the story we received a number of tips that identified the Jamaican national who perpetrated the fraud. He is originally from Portmore, Jamaica and according to our sources just got married to a Jamaican national who is also a Cayman status holder. She resides on Cayman Brac and works at the airport for a security firm. They got engaged on November 17, 2018, and married on December 12, 2018.

Despite wearing a DEH hat during the incident we can confirm he is not employed there. However, his stepson does work at DEH. Our sources further informed us that he worked on the Brac for a local Food 2 Table farmer but he was most recently working at The Layman E. Scott High School there in the canteen. He has his hometown listed as Freeport, New York which could explain the “proper accent” he used when placing the laptop order. It is believed that he is now on Grand Cayman working here as he has not been seen at the school for several weeks; according to our exclusive sources. 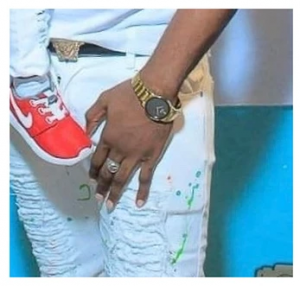 His distinctive Mercedes Benz ring and gold watch can be seen in several of his photos; prominently displayed on the middle finger. On his IG page, he brags that he is “self-made” and is both humble and persistent.

We understand he has a toddler as well.

UPDATE: He has since changed the picture on his IG account and turned himself into the police proclaiming his innocence.

We further understand that others in the community wish to speak to the police about his “fraudulent” activities with them.

No, thanks.
How do you feel after reading this?
Tags: Mark Lawrence

(CMR) Police arrested and charged three men in relation to an armed robbery that occurred at a service station on...

(CMR) A man was robbed by two masked men outside a restaurant on North Church Street after making arrangements to meet...

(CMR) CMR received information early this morning that upwards of "20 shots were fired at a man in West Bay" and...