(CMR) Several young boys were reprimanded about their haircut at Clifton Hunter High School today with one being sent home by Principal Pauline Beckford who decided that his hair cut did not meet the newly enforced standards of being cut with a #2 barber's razor.

One 15-year-old young man on his first day back at the school for having his hair too long. The cousin was simply warned about his and not sent home. It is unclear what was different between the two young men and why they would have been treated differently in the end.

However, the parents are not in agreement as the boys received a significant haircut on Friday before school started back. The issue appears to be that the hair must be cut with the #2 razor all the way around with not differences in length.

“This is ridiculous as his hair is very short. I have been trying to reach her for two hours now and have been unsuccessful in doing so”.

Another family member stressed that they support the dress code and following of rules but felt this specific aspect was being enforced to an extreme degree:

“That’s their rule . I feel sad people think the parents are not cooperating, my view is that we respect the rules, we value the teachers and leaders, we strongly support the uniform rule, we just view the need to have their hair shaved even further like a #2 cut .”

The parent is overseas and is upset that his son is being put through this in his final year in high school. For the past four years his hair cut has never been an issue. The parent is at a loss for what has changed: 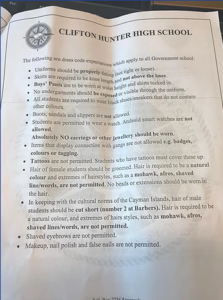 “He has been at the schools since year 7 and now that he's in year 11 and his hair is always cut this way during the school year. It was never mentioned before that this was an area of concern. Today, he was told that he needs to cut it shorter and sent home.”

Others have been left wondering how this haircut would interfere with his education and now think that the principals have misunderstood the intent of the law. One parent noted:

“I'm all for dress codes and standards being in place that are reasonable. However, this hair cut is pretty short – I mean any shorter and it would be unsightly. This is what parents were fearing – a over emphasis on the minute details to the point where the school administration lose sight of educating our children. They are absolutely ridiculous and need to focus on EDUCATIONAL and TEACHING standards”.

Another student who was also told his haircut did not meet the required standards specifically requested a #2 razor cut which according to the sheet given to parents and his mother is also concerned about the response he may get.

“Even though he was very upset that he was unable to attend school today he went and followed the instruction that was given to him by the school that his hair has to be cut by a #2 razor, which you see we did.

Given everything l read that happen today with other kids, it concerns me. however, lets see what BS they have to say tomorrow. As my son mention to me today before he cut all his hair off. My hair should not define me as a person or stop me from learning, and l agree with him.

Don't get me wrong, l am all for obeying the rules, but gosh it seems they want every male child sporting the bald look.”

Mark Luke, an inspiration to many dies