Opposition MLA Chris Saunders (BTW) promises voters that he will be taking to task anyone that seeks to break Cayman immigration laws and thereby deny Caymanian employment opportunities.

In a scathing statement posted on his Facebook page today, he makes no apologies for recently questioning the Health Services Authority (HSA) about their hiring of what he has deemed under-qualified foreign workers whilst qualified Caymanians were overlooked.

The concerns were highlighted by Saunders during this past Tuesday's Public Accounts Committee hearing. He bluntly pointed out that the chief financial officer, the human resources director, and even the chief executive officer were not qualified for their jobs when they were appointed.

In today's social media post he points out the irony of today's Compass editorial calling for a different approach given their interest in advertising dollars for those same job adverts.

Implying that there could be ulterior motives for the editorial's position Saunders points out that “I understand that the HSA advertises in the Compass and that the Customer is always right.”

Ironically, there are actually two advertisements in the Compass today – one for the finance manager position that was criticized during the PAC meeting.

In the PAC meeting, Saunders spent some time grilling the HSA management over their hiring practices which he coined nepotistically.

He said the “crux of the matter” was that there was a mismatch of skill sets, and yet “we are surprised at the results we are having”. He added, “We need the right people with big firm accounting experience for this role,” as he pointed out that the current job description for the CFO at the hospital requires skills that the current post holder does not have.

“There is no way this person should have been hired to work in any finance function in the HSA,” he said, as he submitted the resume of the existing CFO, Heather Boothe, as he said the Caymanian people needed to see for themselves what was going on.

This was the second of two PAC meetings that sought to highlight irregularities in the HSA's hiring practices and other concerns. In the first meeting, Brenda Riley, Human Resources Director, was said to have had some sort of health emergency during the hearing; brought on by the intense questioning and an ambulance had to be a summons for her. Unfortunately, the ambulance was a no-show and she had to get a ride to the HSA.

She then presented a physician's note for Tuesday's meeting asking that she be excused for medical reasons. In her absence, Lizette Yearwood was summoned and Tibbetts attended with her.

We understand that Riley will be summons again at a later date.

The HSA chairman, Jonathan Tibbetts, has since issued a statement refuting those claims. 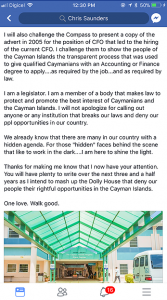 Not deterred by this statement or the Compass editorial Saunders remains resolute that his main focus and concern are the voters that elected him and protecting their interests.

“I am a legislator. I am a member of a body that makes the law to protect and promote the best interest of Caymanians and the Cayman Islands.”

During the PAC meeting, he stated “At what point is the board going to step in …and ensure good governance,” he said, adding that was the only way the politicians and public could have confidence that the HSA really is on the right path.

“We are talking about a $100 million operation,” Saunders said. “It’s not a patty shop.” He added that it was a “good chunk” of the government’s annual expenditure, but key posts were being filled with people who had been training on the job and the board was abdicating its responsibility.

Bernie Bush, the CDP member for West Bay North, also complained about the nepotism and said that further down the pecking order local staff were poorly treated and being passed over because they were “not friends with the right people …didnot go to the right church …or were not from the right country”, as he reflected on constituents’ concerns.

Yearwood opined the PAC had been supplied with insufficient information because the CFO did now at least hold a degree in accounting and economics, and she would ensure they had a copy of her full CV.

Once tabled in the PAC CMR will provide copies of the CVs and job descriptions.

No, thanks.
How do you feel after reading this?
Tags: Chris SaundersHealth Services AuthorityHSA