Cayman Marl Road has been reliably informed that Craft restaurant has submitted a new work permit application for Sarah Waddell, the YouTube waitress that caused quite a stir in the past week on local talk shows and on social media.

The video garnished a lot of criticism for her employer given that he hired someone who admitted she had no relevant experience when locals have indicated that they are actively looking for employment opportunities. Many wondered about the lack of local recruitment efforts at a time when Cayman has a local unemployment rate of over 6%.

Undeterred by the criticism they are seeking to have her return to the Cayman Islands.

The interview was originally conducted in April 2017 in which the waitress indicated that she came here with a plan and was able to save a substantial amount of money after just one year to be able to travel Asia, Europe and eventually her own country.

Waddell was able to go to Vietnam but according to a GoFundMe page soon fell deathly ill and was placed in a medically induced coma in June. However, she made a miraculous recovery and later traveled to Spain and back home to Canada.

Less than 6 months after initially leaving Cayman it appears she is ready to come back and her employer has submitted her application to immigration for her to return. Her employer, Leif Ristimaki, also made social media comments indicated that there was some mix-up as it related to what Waddell was referring to when she said that she had no experience. In fact, her supporters claim that she was referring to her inexperience in traveling and not working in a restaurant. However, upon viewing the video more closely she actually stated, ” I'VE NEVER SERVED BEFORE IN MY LIFE”. She went on to say that she was asked about a bunch of questions that did not know the answer to but impressed them with her attitude. 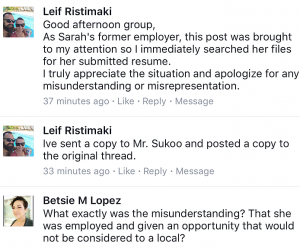 Her employer sent her resume to Newlands MLA, Alva Suckoo and indicated that there had been some “misunderstanding”. Ironically Waddell's resume states that she has experience serving at 2 separate establishments in Canada. Cayman Marl Road has not been able to verify any employment history at those locations for her. Many posted indicated the contradiction and the fact that immigration needed to closely verify all information on her resume. 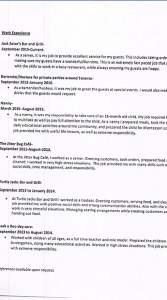 No, thanks.
How do you feel after reading this?
Tags: YouTube