A YouTube video purporting that living and obtaining employment in the Cayman Islands is “so easy” has created a stir on social media and gotten many wondering what's wrong with the system we have in place.

A Canadian national, named “Sarah Jane”, states that she was able to obtain employment before arriving on the island after participating in a half-hour Skype interview. After seeing a Facebook post from “Michele Owens” she sent in her resume and the following day was given the online interview. She admits that she was asked questions “I had absolutely no idea the answers to but I was honest.” Her honesty includes that she was enthusiastic and likes people and was willing to work hard. She further explains that despite having no previous experience as a waitress she was able to secure a job for a year.

She further states she was able to save a bunch of cash moving to the Cayman Islands despite the place being expensive. Now she is able to travel more because of her savings. Her views are that many ex-pats do the same thing she did and you can easily come to Cayman and get a job. In the video, she can be seen drinking from an open champagne bottle and frolicking on 7 Mile Beach.

Many local persons on social media were not impressed with her sales pitch to encourage others to do the same thing as the unemployment rate is 4.1%, but for the local population, it's 6.2%. Given the number of work permit holders, many argue this is unacceptable.

Critics say that the unemployment rates are far higher and that the Progressives led government has no idea how to address this issue as work permits are on the increase at 24, 880 as of July 2017. This figure reflects a continual increase of 22 percent for the past three years.

According to Immigration Department statistics provided to the Cayman Compass under the Freedom of Information Law each quarter since January 2010, the territory has seen a steady increase in work permits granted in the past seven years. Source

Ironically the current administration has admitted that it was not able to get a grapple on the unemployment issue during its last term. When they secured a second term in the May election, with a coalition government, labor was removed from previous minister Tara Rivers and re-labeled as “human resources” and taken by Premier Alden McLaughlin. To date, there has been no indication of a plan of action to address the issue. 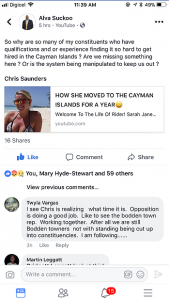 Newlands MLA, Alva Suckoo, was one of the Facebook posters outraged by this video when he knows that so many locals remain unemployed and willing to work. He lamented that:

I think the video highlights exactly what is wrong when qualified Caymanians attempt to get their foot in the door. We are up against a system that is being manipulated and discriminates against even qualified Caymanians. When someone openly admits that were interviewed and told the Interviewer that they have no relevant experience and are still hired on a work permit it is clear there is a bias against Caymanians.

Suckoo was also on Rooster this morning to address various facets of the issue including how job adverts are often exclusively advertised on overseas websites/forums so that locals are not even aware of the vacancies. CMR has seen this on a number of occurrences and readers have been complaining about this obvious attempt at exclusion for some time. Still, nothing appears to have been done to address the matter. Many are even unaware of who is responsible for addressing these concerns or who it can be reported to. 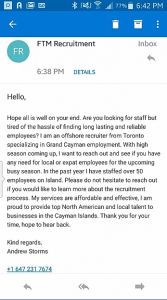 Many others joined in on the commentary and were clearly not impressed with Sarah's assertions that finding work in the Cayman Islands before you even land on our shores is so incredibly easy to do.

One poster noted that the Progressives will only wake up when poor people begin to take matters into their own hands.

Ironically Cayman Marl Road is currently working on a piece about the injustices of employment promotions and lack of opportunities even with the country's largest employed – The Cayman Islands Government. The civil service is not immune to criticisms of favoritism and nepotism in promoting non-Caymanians.

Note after the publication of the story the video was removed from YouTube. CMR was savvy enough to obtain a screenshot of it in advance as we anticipated this outcome!

UPDATE: We have since obtained a copy of the full video which you can now view.

Ironically someone claiming to be her former employer posted an apology for “any misunderstanding or misrepresentation on our Facebook page. We are uncertain as to what he means precisely: 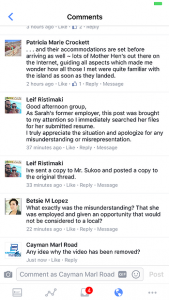 No, thanks.
How do you feel after reading this?
Tags: FacebookYouTube