In one photograph an RCIPS SUV is seen parked in a handicapped parking spot at a 24/7 Rubis gas station. When contacted the RCIPS indicated that the officers were responded to a false panic alarm at the station. 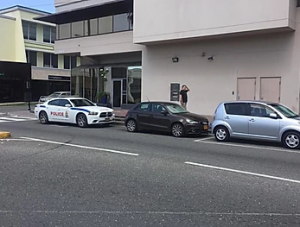 There was another picture posted yesterday that showed an officer parked very close to a crosswalk and in an area not designated for parking at all in central George Town by Scotia Bank. The RCIPS reminded us that officers are entitled to “park anywhere that they may need to when responding to a call for service, including disabled parking” although they try to avoid that whenever possible.

Without any further details on this vehicle, they were unable to confirm if the officer was actually on a service call or not.

The police officers continue to be equally scrutinized with the rest of the public on the Facebook group page for any apparent traffic infractions. Many posters have expressed witnessing firsthand various infractions by uniformed officers and have attempted to document it whenever possible.

RCIPS staff attend Women in Policing Conference in London
Police investigate illegal dumping in Newlands
Armed robberies up by almost 400 percent
RCIPS: Fake email purporting to be from the police
Share your vote!